Looking back at John Singleton's Rosewood 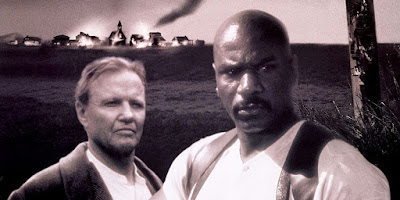 As a tribute to John Singleton, the gifted filmmaker who died Monday at the ridiculously young age of 51, I offer my original 1997 review of his “Rosewood.”

Given the facts that inspired the makers of Rosewood, it shouldn't be surprising that so much of the movie, for good or ill, has the look and feel of fiction.

During the first week of January 1923, the residents of Rosewood, a predominantly black settlement in Central Florida, were savagely attacked by angry whites from the nearby mill town of Sumner. Until then, the people of both areas had co-existed in relative harmony. Indeed, many of them knew each other, had done business with one another. But this familiarity did little to diminish the bloodlust of the Sumner mob once a white woman announced that she had been assaulted by a black man. Over a period of four days, many black men and women were shot, lynched or burned alive in and around Rosewood. The exact number of the victims remains a subject of historical dispute — estimates range as high as 250. The survivors fled into the swamps to escape certain death, leaving behind all their worldly possessions. They never returned. Rosewood was wiped off the map. In effect, the mob from Sumner murdered the entire town.

The history and destruction of Rosewood remained unknown to the rest of the world for more than six decades. Survivors rarely talked of the tragedy outside of their immediate families. At first, their silence could be attributed to fears of reprisal. (After all, the folks of Sumner were alive and well and, quite possibly, ready to return to their vigilante ways.) As time went by, however, it became obvious to the descendants of those who had escaped Rosewood that the survivors were too traumatized — and, perhaps, too ashamed — to say anything of what had happened.

By the time a tenacious reporter for the St. Petersburg Times began to piece together the story of Rosewood in 1982, most of the survivors had died, and those who remained alive were reluctant to talk. Eventually, journalist Gary Moore — no relation, presumably, to the TV variety show host of yesteryear — tracked down about 20 survivors and their descendants. From their accounts, he fashioned a story that attracted the interest of producers from TV’s 60 Minutes. The resultant publicity fueled the efforts of Arnette Doctor, the son of a Rosewood survivor, to demand reparations for the survivors and their families. Finally, in 1994, the Florida state legislature passed a bill providing for payments to the Rosewood survivors. By that time, inevitably, Hollywood had begun to take notice. Producer Jon Peters acquired the rights to the story, beginning the process that has led to the release of Rosewood.

Unfortunately, by now there is very little first-hand information about what happened in the Florida town more than 70 years ago. Director John Singleton, the immensely talented young filmmaker who made his first impression with Boyz N the Hood, and screenwriter Gregory Poirier spoke to a few survivors and their relatives. For the most part, however, they were forced to extrapolate from oral histories and local legends. Clearly, the filmmakers have based many of their speculations on other accounts of racial tensions in Central Florida during the 1920s. Just as clearly, they also have tossed a healthy dose of Hollywood hokum into the mix.

Surprisingly enough, the mix jells into something truly substantial. Rosewood is such a cunningly constructed and emotionally overwhelming piece of work that, even when it veers off into Wild West clichés and Saturday matinee heroics, the drama remains powerful and persuasive. Singleton and Poirier take care to sprinkle a few complex characters among the familiar archetypes, and ground the entire story in reality by vividly evoking the specifics of time, place and attitudes. This may not be precisely how things happened in real life. But Rosewood is more than convincing enough to help us accept the more fanciful touches of dramatic license.

Mann, the most brazenly stereotypical of the lead characters, is also, according to the film’s production notes, the only character Poirier invented entirely out of whole cloth. Played with taciturn dignity and hulking authority by Ving Rhames, Mann comes across as a classic gunfighter hero — eager to settle down, reluctant to involve himself in scrapes, lethally efficient when push comes to shove. The big differences is, he’s African-American. More precisely, he’s a black World War I veteran who rides into Rosewood on a handsome horse, and is greatly impressed by a place the locals describe as “heaven on earth” for black people.

Rosewood is indeed usual for its time, being a town where most of the residents are black, and many of them are, by standards of the era, prosperous. One of the few white citizens, John Wright (Jon Voight), is a store owner who actually treats his black neighbors with respect. Whether he does this only because it’s good for business isn't initially clear. In any case, Wright has managed to earn the wary admiration of Sarah Carrier (Esther Rolle), a family matriarch who doesn't always speak highly of her fair-skinned neighbors. Mr. Wright, she tells Mann, “is a half-way decent white man — if there ever was such a thing.”

For a long time, Mann functions primarily as a plot device, serving as the audience’s surrogate while he is introduced to the major residents of Rosewood. In addition to John Wright and Sarah Carrier, the notables include Sylvester Carrier (Don Cheadle), Sarah’s son, a proud piano teacher who defiantly insists on treating white men as his equals; and Scrappie (Elise Neal), a 17-year-old schoolteacher who makes Mann think seriously about giving up his wandering ways. Rosewood takes ample time to let us know these people, to appreciate the simple pleasures and satisfactions of their everyday lives, before Singleton and Poirier ignite the nightmare. The slatternly white women who claims she was attacked by a black man — possibly an escaped convict — is a liar. (The audience sees her being assaulted by her brutal white lover.) More important, just about everyone in Sumner, even her husband, suspects she is lying. But that doesn't stop the rumors from spreading or the anger from blazing.

Rosewood makes it very clear that virulent racism isn't the only thing feeding the mob’s bloodlust. Most of the white folks in Sumner are depicted as low-income rednecks who bitterly resent the apparent prosperity of “those niggers” in Rosewood. In one telling scene, a sneering redneck wonders aloud why Sylvester Carrier can afford a piano while he, a white man, can’t. A friend points out that the redneck doesn’t even know how to play the piano. But that information is brushed aside as insignificant. It’s the principle that matters.

When the full fury of the hate-filled mob begins to hammer down on Rosewood, the spectacle is at once horrifying senseless and painfully familiar. By sheer coincidence, I saw Rosewood at the recent Berlin Film Festival, just a few hours after seeing Calling the Ghosts, a documentary about Croat and Muslim women who were raped and beaten by their Serbian captors during the Bosnian civil war. These women, like most of the other prisoners in their internment camp, had lived for years alongside their Serbian neighbors, and had assumed these people were their friends. Just like the black townspeople in Rosewood thought they knew, and were known by, the good folks of Sumner.

Late in Rosewood, there is a scene where the white mob dumps dozens of black corpses into a massive grave. Once again, the scene was all the more chilling for me because I viewed it in the context of a film festival where ample evidence of man’s inhumanity to man abounded. I couldn't help thinking of other things I had seen in Berlin — documentaries and dramatic films about wartime horrors and, even more joltingly, an exhibition at The Topography of Terror, a museum on the site of the former Gestapo headquarters, that showed Nazis disposing of their many victims in a fashion very similar to that of the racists thugs in Rosewood. Hate is a virus. It takes different forms, but the symptoms never seem to change very much.

With all that fresh in my mind, I may have been more willing than most moviegoers to forgive the makers of Rosewood for wanting to show heroism and self-empowerment as well as evil and destruction — for wanting to provide some glimmer of hope in something like a happy ending. The movie is tremendously effective as a large-scale reconstruction of terrible historical events that should never be forgotten. On the other hand, Rosewood also gives us in Mann and John Wright two characters who transcend their differences, and their own mutual suspicions, to save as many lives as possible. (Voight is exceptionally good at illuminating Wright's moral complexities.)

To say more would risk spoiling the impact of the movie’s pulse-pounding climax. Suffice it to say that, by embellishing the known facts with a few romanticized flourishes, Singleton and Poirier have struck a fair balance between their responsibility to historical truth and their desire to entertain — and, yes, inspire — audiences.