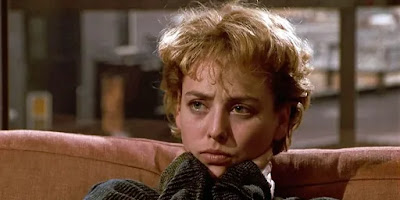 October 26, 1992 |  The good news is, Virginia Madsen got to go back to her native Chicago to shoot scenes for her new movie, Candyman.

The bad news was, those scenes were shot in and around Cabrini-Green, a housing project once known to locals as “Little Hell.”

“When they told me that’s where we’d be working,” Madsen said a few days ago in a telephone interview, “that scared me more than knowing I would do a scene with live bees all over me.

“And I'm allergic to bee venom, so that should tell you something.”

Just a few days ago, USA Today ran a front-page story on Cabrini-Green, graphically describing the urban blight as “arguably the nation’s most notorious public housing project…  a 70-acre, 7,000-person ‘city’ of isolation and despair.”

The “rubble-strewn, graffiti-covered war zone” is just a few blocks “from the some of the richest downtown real estate in the USA.” But as far as most Chicagoans are concerned, Madsen said, the place might as well be on another planet, or in some lower circle of hell.

“They have other notorious housing projects there,” said Madsen, a 31-year-old actress whose credits include The Hot Spot, Slamdance and Highlander II. “But Cabrini is staring everyone in the face, because it’s literally three blocks from the Gold Coast. And it never should have been built, it’s way too big, it looks like a prison. And there’s never been anything done to make life better there. So it’s just got a terrible history — and a terrible present day as well.

“While I was growing up there, I never went near the place. And the dialogue you hear in the film — like, 'Yeah, I don't even want to drive by there!' – that’s all very true.’

All of which enhanced the scariness of the fiction that is Candyman, a high-voltage shocker based on a short story by horror master Clive Barker (Hellraiser). Writer-director Bernard Rose (Paperhouse) took Baker’s story, “The Forbidden,” and transported the plot from Liverpool to Chicago. But he preserved Barker’s basic premise: The Bogeyman is alive and well and willing to make personal appearances.

Who is Candyman? The vengeful spirit of a handsome black artist who was killed by a mob of racist white thugs in 1890. He pops up whenever anyone, black or white, is foolish enough to say his name aloud five times while looking in a mirror.

Helen inadvertently summons him during her research. Candyman takes one look at the beautiful blond academic, and offers to make their relationship a permanent one.

And that, Madsen said, is why she thinks of Candyman as “a gothic love story,” not a mad-slasher movie.

“I think it would be different if Tony Todd’s character were a monster. But he’s not a monster —  he’s a phantom. He is like Dracula, a romantic phantom. He’s beautiful, he's seductive, he wants you to join him in immortality.”

Laughing, she added: “Yes, he does have this thing where he likes to disembowel people. But all lovers have some little annoying thing about them, some bad habit — don't they?”

The Candyman crew spent a week filming in Cabrini-Green. (The rest of the picture was shot on L.A. soundstages.) Not a very long location shoot, to be sure, but long enough for Madsen to realize there are far more frightening things in this life than movie monsters.

“The most frightening thing about a place like Cabrini-Green is the bleakness,” she said. “It makes you feel so terribly ignorant, that you know absolutely nothing about these people. And you couldn’t even begin to understand what it's like for a kid to grow up there.

“And since we were there in winter, it gets dark very early, around 4 o'clock. Well, let me tell you: After 3:30, people disappear. They stay inside. And you can feel the vibes starting.”

Still, even in the midst of such despair, you can sometimes find hope. While doing research for Candyman, writer-director Rose met Henrietta Thompson, a Cabrini-Green resident who offered her services as consultant. She quickly became the real-life model for one of Rose’s characters, Anne-Marie McCoy (played by actress Vanessa Williams), a single mother struggling against the odds to be a good provider and an upright citizen.

“A character like Anne-Marie is a really important character,” Madsen said, “because that’s what 90 percent of the people who live there are like. It’s a very small percentage of people that really rule that place. There are three different gangs that rule various territories. And the middle, neutral ground is the only free zone.

“You know, we’re not doing the right thing by these people. And you can make all the speeches in the world about, ‘Well, why don't they just pull themselves up by their bootstraps?’ But, you know, a lot of them, that’s exactly what they are doing. That's why they’re still alive. They’ve been pulling themselves up by their bootstraps all their lives.”

They were exceptionally communicative throughout the process—with an impressive response time to boast. alcohol treatment fairfax county