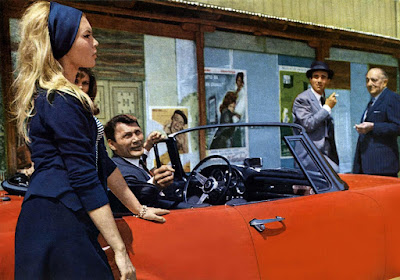 So there I was in my hometown of New Orleans in 1991, attending the junket for City Slickers and seated at a table with Jack Palance. I wanted to ask a question I figured that he hadn’t been asked a zillion times before, so I tossed him this one: What was it like to work with Jean-Luc Godard in the 1963 international co-production Contempt?

Palance smiled at me — indeed, almost winked at me — and replied.

“Godard, I thought, was a good filmmaker, but he was so… Well, I remember, we had a question about a scene that we were doing, and I thought maybe there was something I should be doing, and he said, blatantly, ‘You know, of course, that I am considered one of the great filmmakers today.’ And I said, ‘No, I didn’t know that. Why don’t you tell me about it?’ And so he goes on like this.

“See, he was doing that with all the actors. Like, ‘And now, I think if you touch the glass on the table…’ And you know you’re not going to touch the glass after he’s shown you something like that.”

And yet, for all that, Palance said Contempt had its funny moments. Sort of.

“I think one of the most memorable things for me in that film was doing a scene with Brigitte Bardot. We were in that red car, a little red car, and we had a scene where she and I just drive away. We’re going off to something. No dialogue. And we’re set up somewhere in Italy, and Godard’s got his camera way over there. He’s sitting on a box, hunched over, and he wore a hat, looking like a very, very artistic picture of a director.

“And so, we start to drive. We drove by, and we could hear his voice saying, ‘All right, we will do an encore. We will do it again, please.’ So you come back — there’s no explanation of what went wrong — and you do it again. And then you do it again. And do it seven, eight times — just driving by the camera, nothing else. And nobody says, ‘Faster,’ or ‘You're looking at the wrong direction,’ or some goddamn thing.

“So, as we got back this time, I said to Bridget, ‘Look, if he says we’re going to do it again, you and I are going to lunch.’ And as we drove by, we heard the voice saying, ‘Tell them we will do it again’ — well, we just kept driving.

“It’s true. We went off into the mountains, had a nice lunch, came back — and so help me God, he had not moved! He was sitting there, and as we approached, he said, ‘Tell them we will do it again!’

“And that was Jean-Luc Godard…”