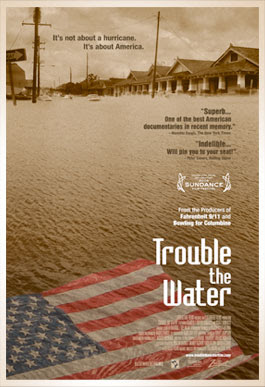 Talk about being in the wrong place at the right time: Kimberly Rivers Roberts, an aspiring rapper and self-described "street hustler" living in the Lower Ninth Ward of New Orleans, had just recently purchased a Sony camcorder in August 2005 when Hurricane Katrina slammed into her city.
Like too many other residents of their predominantly African-American neighborhood, Kimberly and her husband, Scott Roberts, lacked the wherewithal to evacuate, so they stayed put. At first, Kimberly was happy to play the part of "interviewer," pointing her camcorder at relatives and neighbors while asking how they would ride the storm. But then the rains came. Kimberly and Scott, along with a handful of others, wound up warily watching from their attic while waters from breached levees flooded the streets — to the point of submerging stop signs — outside their home. And throughout it all, Kimberly continued to operate her camcorder, instinctively capturing indelible images that are the heart of a powerful new movie aptly titled Trouble the Water.
You can read my entire Houston Chronicle review here.
Posted by Joe Leydon at 10/31/2008 02:32:00 PM