Robert Davi puts up his Dukes 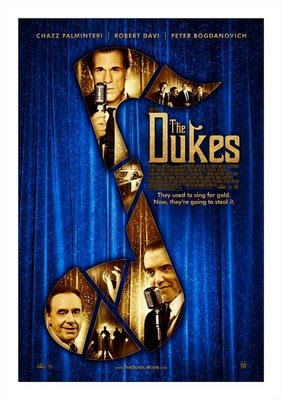 Looks like Josh Brolin isn’t the only alumnus of The Goonies who’s enjoying a career uptick. Veteran character actor Robert Davi – a memorable Goonies baddie – is about to launch the long-awaited theatrical release of The Dukes, his first effort as a feature filmmaker, after a long tour on the international festival circuit. (I was pleased to present Davi's enjoyable comedy-drama as my Critic’s Choice selection at the 2007 WorldFest/Houston International Film Festival.) In addition to directing and co-writing The Dukes, Davi stars (alongside Chazz Palminteri and Peter Bogdanovich) and sings in the movie, which opens in New York Nov. 14, and expands to other markets Nov. 21.

As I wrote in my original Variety review: "Davi neatly balances humor and heart while smoothly moving to a doo-wop beat in The Dukes... a low-key charmer about members of a '50s vocal group who, nearly five decades after their fleeting heyday, contemplate crime to fund a long-sought comeback. With Davi and Chazz Palminteri fronting a first-rate ensemble cast, and a tasty soundtrack of golden oldies, this unpretentious indie dramedy has much to recommend...

"Although George (Palminteri) and Danny (Davi) occasionally join their fellow Dukes for a gig on the nostalgia circuit -- where, due to Danny's temperamental demands, their bookings are becoming increasingly rare -- the two middle-aged cousins rely on steady jobs as cooks in an Italian restaurant run by their Aunt Vee (Miriam Margolyes).

"George thinks it would be a nifty idea to buy a shuttered nitery and turn it into a Doo Wop Club where the Dukes would headline. Unfortunately, neither he nor his fellow crooners -- including the over-eating Armond (Frank D'Amico) and the easily excitable Murph (Elya Baskin) -- have enough money to finance such a scheme.

"Their longtime agent (a well-cast Peter Bogdanovich) tries to help his hapless clients recycle their few big hits in an oldies compilation... But when those plans come to naught, even the initially reluctant Danny is forced to reconsider George's dicey plan to burglarize a dental clinic.

"Working from a script he co-wrote with James Andronica, Davi proves gracefully adept at shifting tones and varying moods, sometimes within a single scene. (Take note of the way he merges knowing satire and affecting pathos while Danny and his fellow Dukes humiliate themselves for a TV commercial director). There's a nicely respectful hint of Big Deal on Madonna Street throughout the scenes in which the amateur criminals plan and execute their latenight break-in to swipe gold used for dental fillings. Crime doesn't pay, of course. But it does provide at least one good laugh (for Danny, at least) in a modestly clever plot twist.

"Best known for playing intimidating badasses in films ranging from The Goonies to License to Kill, Davi gives himself ample opportunity here to appear tender as well as tough, so that Danny remains sympathetically vulnerable as his desperation mounts. The actor is at his best in a quiet scene where Danny's son asks him why he no longer sings. 'Daddy's time passed,' he wistfully replies. 'And now it's tough for him to do that.'"
Posted by Joe Leydon at 10/21/2008 02:26:00 PM