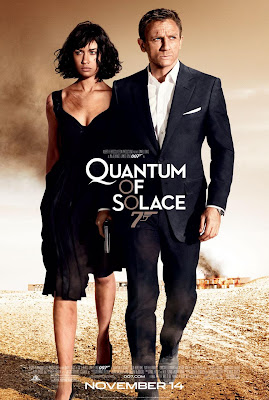 OK, I admit: The first time I did a couple of "Critics Roundup" segments for At the Movies, I felt like I'd charted heretofore unplumbed depths of total suckage. Indeed, I feared that, after the taping, a producer would call me and say something like, "Uh, Joe, that really didn't, er, work out, did it? So, well, we're going to, like, edit you out..." But I guess I didn't stink up the joint as badly as I feared. They asked me back to tape a new segment today with hosts Ben Lyons and Ben Mankiewicz and Matt Singer of IFC. We talked about Quantum of Solace -- and you can hear what we had to say this weekend on fine TV stations everywhere.
Posted by Joe Leydon at 11/12/2008 07:57:00 PM

You know, I really like that poster: Pretty people looking roughed up and concerned. It hints at an interesting story to be told.
- Movie Gal
P.S. Am very much looking forward to hearing your take on it on At the Movies!

Actually, it'll air in Houston (according to the KTRK website) at 1:05 am tonight (well, actually, Saturday, but mever mind) and 1:30 pm Saturday.