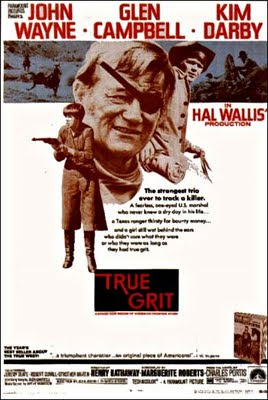 Look like all those rumors about a remake of True Grit... aren't just rumors. According to Variety, filmmakers Joel and Ethan Coen are scheduled to start production next March -- for a late 2010 release -- with Jeff Bridges (a veteran of the Coens' cult-fave The Big Lebowksi) filling in for John Wayne as grizzled lawman Rooster Cogburn. Matt Damon reportedly is "in talks" to co-star as the Texas Ranger played by Glen Campbell in the original 1969 film -- which, like the remake, was based on a novel by Charles Portis. And Josh Brolin, who figured prominently in the Coens' Oscar-winning No Country for Old Men, may sign on to play the chief villain of the piece. No word yet on who will portray the feisty young woman played in the '69 original by Kim Darby.

When I asked the Coens about this project last month -- during round-table interviews for A Serious Man at the Toronto Film Festival -- they insisted that their version will be “more faithful” to Portis’ novel than the film that helped The Duke win his one and only Academy Award. And, hey, maybe it will. To be honest, the '69 picture wasn't exactly a classic. And, to be even more honest, Wayne deserved an Oscar more for She Wore a Yellow Ribbon and/or The Searchers. But, dang, try telling any of that to the diehard fans who are bound to squawk no matter how good the Coens' remake will be.
Posted by Joe Leydon at 10/26/2009 04:18:00 PM

The original reports about the Coens tackling True Grit kind of threw me, but then it clicked. As you discovered, they're not remaking a John Wayne movie, they're making a Coen movie based on the Portis novel. There is nothing about this that isn't awesome and the new (potential) casting just gets me even more excited.

I wonder who they'll get for Mattie.

Well, I hope the role does more for whoever the Coens pick than it ever did for Kim Darby.

I hope whoever they pick does more for the role than Kim Darby did! Ba-DUMP bump TCCCHHHHH.

I'm a fan of Westerns, and I'm not a fan of True Grit. Watching it just seems like a 1960's western instead of a "western" Western. The stunt casting of Glen Campbell is particularly gruesome.

Another great Wayne performance was for his last one "The Shootist".

Funnily enough, Glen Campbell made a sufficiently favorable impression on audiences for Paramount to re-team him with Kim Darby one year later in Norwood, a comedy drama based on another Portis novel. Joe Namath co-starred. But that didn't help much.