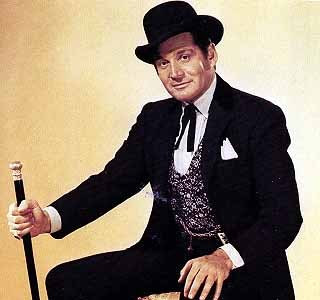 How cool was Gene Barry? So cool that, when I was a mere broth of a lad growing up in New Orleans, I faithfully watched every episode of Bat Masterson -- and scraped enough money together to purchase by mail from the TV show's sponsor, Sealtest Milk, my very own Bat Masterson cane. (Which, alas, I broke within days after its arrival.) As I grew older, I watched Barry in Burke's Law with the same fidelity, and marveled at the unabashed lust he inspired in my usually prim and proper Aunt Madge, who -- always a tad too fond of Tom Moore bourbon -- once blurted out after a few stiff belts: "He could kick his shoes under my bed anytime!")

Barry was an affable and ingratiating journeyman actor who brought an air of authoritative integrity to his recurring role as a magazine editor in the way-cool late '60s/early '70s TV series The Name of the Game -- in one especially memorable episode, a sci-fi fantasy, he was directed by a young Steven Spielberg -- and, as Washington Post blogger Adam Bernstein reminds us, he was not afraid to ruffle the feathers of his more conservative fans when took one of the lead roles in the original 1980s Broadway production of the musical La Cage aux Folles

"I'm not playing a homosexual," Mr. Barry told the New York Times. "I'm playing a person who cares deeply about another person. The role is loving another person onstage. It doesn't matter whether it's a man, a woman or a giraffe. It has nothing to do with sexuality, as far as I'm concerned. I play the dignity of the man, his concern for his lover and his concern and love for his son."

), The Houston Story (directed by -- no kidding! -- William Castle), Thunder Road and -- of course -- the original 1953 version of The War of the Worlds. Barry was so closely associated with the latter that Steven Spielberg -- years after their first collaboration on Name of the Game -- respectfully hired him for a cameo part in Spielberg's own 2005 version

of the H.G. Wells novel. It was, quite simply, a classy tribute to a classy actor.