Bust from the past: Troll 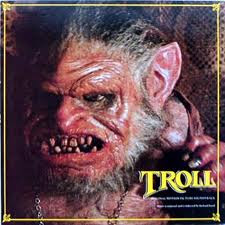 (Editor's note: Here is my original, unedited review of Troll

Ever wonder where unemployed TV performers go when they're between guest spots on The Love Boat? Well, according to Troll, an astonishingly silly tongue-in-cheek fantasy, all the has-beens, never-weres and old reliables check into a cheery apartment house where a furry little beastie lurks in the laundry room.

Shelley Hack (Charlie's Angels), Brad Hall and Julia-Louis Dreyfus (Saturday Night Live), Sonny Bono (The Sonny and Cher Comedy Hour), June Lockhart (Lassie) and Gary Sandy (WKRP in Cincinnati) are among the residents menaced by the title monster, a pointy-eared fiend summoned up from heaven knows where. The troll wanders around the building for an hour or so, turning apartments into verdant forests, and humans into slime-coated, foam-rubber puppets. Not to be outdone, June Lockhart turns herself into her daughter, Anne Lockhart, and battles the little creep. No kidding.

The troll, known as Torok, resembles a defective Muppet. All the other creatures on view look like leftovers from Gremlins. To be honest, Gremlins wasn't a very good movie, either. But Troll makes it look like Citizen Kane.
Posted by Joe Leydon at 7/29/2010 04:40:00 PM

Email ThisBlogThis!Share to TwitterShare to FacebookShare to Pinterest
Labels: "Troll"