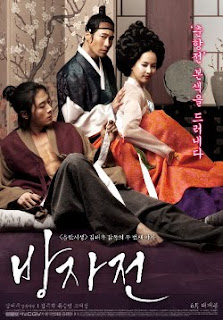 And now for something spicy from South Korea: The Servant (a.k.a. The Story of  Bang-ja jeon), writer-director Kim Dae-woo's sexy, cynical take on a centuries-old Korean folktale. How sexy? Well, hardly hard-core, I admit. But there's enough unclothed activity on view here to indicate that, had it been submitted to the MPAA ratings board, the period drama would have been slapped with an NC-17 rating. On the other hand, as you can read in my Variety review, that's not the only reason it's worth seeing during its limited U.S. theatrical run (which includes an engagement in H-Town at the AMC Studio 30).
Posted by Joe Leydon at 7/20/2010 05:52:00 PM

Email ThisBlogThis!Share to TwitterShare to FacebookShare to Pinterest
Labels: "The Servant", Kim Dae-woo

I hope this comes here! Thanks for the heads-up.