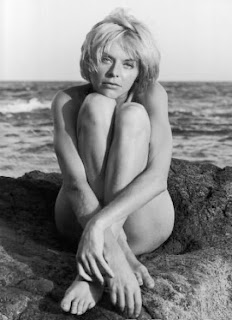 As a hormonally inflamed adolescent during the 1960s, I harbored considerable lust in my heart (and other vital organs) for British actress Susannah York as she appeared as a sprightly, sexy and altogether scrumptious presence in movies as diverse as Tom Jones

, the cheeky 1966 comic-thriller in which she played the vivacious romantic interest for an audacious gambler (Warren Beatty) who breaks into a card-printing plant to mark the cards and thereby ensure his winning streak at various European casinos.

Well into the ‘70s, as she shared a bubble bath with Roger Moore in Gold

(1974), became Elliott Gould’s partner in crime in The Silent Partner

(1978), and ultimately served as the hypotenuse of a romantic triangle with Michael Caine and Elizabeth Taylor in X, Y and Z (1972), she continued to impress as a slow-simmering hottie, sassy and sensual but, when she needed to be, endearingly vulnerable.

But, trust me, she was not just another pretty face. In 1969, York – who passed away Saturday at age 72 – earned an Oscar nomination for Best Supporting Actress with her devastatingly potent performance as a Jean Harlow wanna-be in Sydney Pollack’s metaphorical Depression Era dance-marathon drama, They Shoot Horses, Don’t They?

, Robert Altman’s engrossing psychological thriller about a troubled housewife who may or may not be threatened by men from her past.

And, of course, if you’re a comic-book fan of a certain age, you’ll surely have fond memories of York as Lara, the Krypton-born mother of the Man of Steel in Superman: The Movie

On the other hand: I would be remiss if I did not admit to remembering Susannah York best for a role that, as far as I can tell, isn’t getting much mention in the first wave of her obituaries. You see, way back in the fall of 1968, during my senior year of high school, I dated a slightly “older” woman – 19 to my 16 – who was bisexual with a pronounced preference. How pronounced? Well, let me put it like this: After she asked me to take her not once, not twice, but three times to see Robert Aldrich’s The Killing of Sister George

– in which York played an elfin beauty who bares her bountiful breasts while being seduced by the conniving rival (Coral Browne) of York’s brazenly butch lover (Beryl Reid) – I kinda-sorta figured that I didn’t have a chance of scoring with this particular switch-hitter.

Funnily enough, York seemed richly amused when I told her about my York-lusting ex-girlfriend during an interview a few years later. And that emboldened me to ask: In the wake of The Killing of Sister George – a movie graphic enough to get an X rating back in the day – did she receive many admiring letters from other women who enjoyed her, ahem, revealing performance?

“Quite a few,” York replied with just a trace of a naughty smile. “Quite a few.”

Joe, I am beginning to think that you have met -- not to mention lusted for -- just about every actress who ever graced the screen. Not that I'm complaining, you understand. The anecdotes about your encounters with the famous often reveal more about them than what I read just about anywhere else.

Years ago, I too lusted after Susannah, oddly enough after her role in A Man for All Seasons. I wanted some of that spunk for myself and was quite sure she should have thrown over that priggish Roper fellow for someone who could appreciate her non-intellectual virtues. Later, when I saw The Shoot Horses, I was amazed at the actress who played the platinum blond, but couldn't see the credits because my annoying date wanted to talk about the history behind the movie (certainly didn't marry that one). Outside, I studied the poster and discovered the actress was Susannah. That has since been my measure of great acting, that I should have lusted after a girl in one movie and not even known who she was in the next.