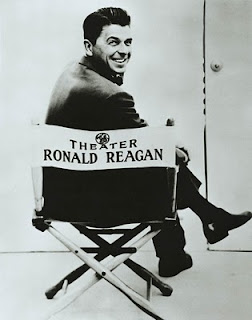 Throughout the many hours of televised tributes to Ronald Reagan that aired in the wake of his passing back in 2004, I noticed a curious phenomenon: Hardly anyone on any network felt compelled to dwell on The Great Communicator's heyday as a Hollywood star.

Sure, there were fleeting excerpts from Reagan's more notorious cinematic misadventures – including, of course, Bedtime for Bonzo – and much informed discussion of the many ways his training as an actor enhanced his ability to convey equal measures of authority, affability and earnestness during his White House years. For the most part, however, pundits and acolytes alike seemed all too eager to blithely dismiss Reagan's entire movie career – a career, it should be noted, that spanned four decades, and included nearly 60 films – as undistinguished at best, vaguely embarrassing at worst.

Most commentators relied on recycling scraps of conventional wisdom: As an actor, Reagan was never anything more than a B-movie stalwart, or a typecast cowboy – or, perhaps most humiliatingly, a hero's best friend who never got the girl. Several years ago, film historian David Thomson described Reagan's 1966 entry into politics (as a California gubernatorial candidate) as “the greatest career move in the history of entertainment.” That judgment, originally intended as a not-so-veiled insult, has come to be widely accepted as an accurate, maybe even generous, appraisal.

Indeed, even now, as we approach the Feb. 6 celebration of the centennial of Reagan's birth, the conventional wisdom suggests that the conservative Republican icon turned to politics in the first place mainly because he had become unemployable in a profession where he had never, ever excelled.

But here's the thing: Any fair-minded observer who bothers to look at his resume – or, better still, actually looks at some of his movies – must admit that Reagan's cinematic oeuvre is far more impressive than his worst critics, and even many of his devoted admirers, might admit. To be sure, Reagan rarely rose above the level of journeyman actor – much like Don Ameche, Fred MacMurray and several other of his contemporaries, he was more of an engaging personality than a consummate artist. But his undeniable charisma and polished professionalism served him very well in starring and supporting roles. In short: He certainly was no worse, and quite often much better, than many of the notables routinely embraced as beloved Old Hollywood contract players.

Among his movies worth viewing on cable or video:

(1939) – As a chronically inebriated and genially self-deprecating playboy, Reagan evidences a light touch for comic relief during his half-hearted (and highly unsuccessful) courtship of a doomed Bette Davis in this glossy, guilty-pleasure soap opera. But be forewarned: Some viewers may be inconsolably upset by seeing the future leader of the free world as an amiable lush.

(1940) – Reagan is on camera for only 15 or so minutes in this romanticized tribute to the legendary Notre Dame football coach (played by Pat O'Brien). But he makes every moment count as George Gipp, the breezily self-assured gridiron great whose “Win one for the Gipper!” deathbed speech (yes, this is how Reagan earned that nickname) has been known to make grown men weep.

(1942) – Often cited as Reagan's finest film, and his own personal favorite, it's a seamy tale of small-town hypocrisy that tested the limits of Production Code propriety. The future Commander in Chief is at his most compelling as Drake McHugh, a feckless rake whose legs are needlessly amputated by a sadistic surgeon. (The bad doctor wanted to keep Drake away from his lovestruck daughter.) Upon awakening after the operation, Reagan memorably wails an anguished lament: “Where's the rest of me?” The line became so closely associated with him, he eventually used it as the title of his 1965 autobiography.

(1942) – As one of five Allied airmen shot down behind enemy lines during World War II, Reagan gets most of the best lines in Raoul Walsh's rousing adventure opus. He's at his best when his all-American hero confounds a German interrogator with tricky wordplay, then smacks the naughty Nazi into dreamland. Errol Flynn, the movie's nominal star, was not amused: He bitterly complained during production of Desperate Journey that he, not Reagan, should play the show-stopping scene. Producer Hal Wallis had to intervene on Reagan's behalf to keep Flynn from filching the funny business.

(1951) – During his heyday as host of The Tonight Show, Johnny Carson never tired of mocking his executive producer, Fred De Cordova, for having directed this silly slapstick comedy. Surprisingly enough, however, the movie doesn't quite live down to its reputation. And Reagan comes off as a genial good sport in the lead role of a college professor who tries to prove his nurture-versus-nature theories by raising a chimpanzee as human child. It should be noted, however, that the Gipper declined an offer to return for a 1952 sequel, Bonzo Goes to College, also directed by De Cordova.

), Reagan took his only walk on the wild side as Jack Browning, a seemingly respectable businessman who masterminds a mail-truck robbery, betrays his getaway driver (John Cassavetes), slaps around his shapely mistress (Angie Dickinson), and winds up perforated by a peeved hit man (Lee Marvin). Reagan hated playing a villain -- and didn't think much of the movie, either – which made it all the easier for him to leave showbiz for a political career. Still, at the risk of sounding disrespectful, or subversive, I strongly suspect he could have worked another 20 years as a character actor if he had continued to be so good as a bad guy.

I find your recap of Reagan's roles both Fair and Balanced. LOL