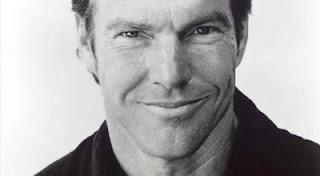 I can’t help being amused, and more than a little puzzled, by the various ways people have responded to Dennis Quaid’s “My Favorite Mistake” essay in Newsweek earlier this week. In the piece, Quaid frankly admits to having been a heavy-duty cocaine fiend back in the bad old days of the 1970s and ‘80s. He spent a goodly portion of the ‘90s recovering from his wretched excess – and now credits his post-rehab experiences for giving him “the resolve and a resilience to persevere in life” and his career. “If I hadn’t gone through that period,” Quaid writes, “I don’t know if I’d still be acting. In the end, it taught me humility. I really learned to appreciate what I have in this life.”

Now, please don’t misunderstand: I have nothing but respect for Quaid for his brutal honesty about his self-destructive behavior. And I appreciate his tenacity and discipline, two sterling attributes I wish he could share with someone very close to me who’s been battling similar demons for decades.

But I remain perplexed by the commentators who have expressed surprise and/or snarkiness while noting Quaid’s comments. While reading what some of these people have written, you’d almost think Quaid had never discussed this subject with anyone before, and was doing so now only as some sort of publicity ploy.

The truth is, Quaid has been entirely forthcoming about his recovery while talking to the press for more than a decade and a half. Hell, he’s even talked to me about it – on several occasions, in various interviews since 1993. And he’s had to know that I’ve been reporting what he’s said: The first of those interviews appeared in his hometown newspaper, The Houston Post.

Back when I was film critic for the Post, I covered a Los Angeles junket for Flesh and Bone

– a 1993 drama for which Quaid should have received an Oscar nomination – and the Houston-born actor already was celebrating his third year of being drug-free.

Mind you, he made no excuses for his substance abuse. And he wasn’t big on offering horror stories to warn the unwary. “I’m not one of those people who are going to tell you how terrible it was for me,” he said, “because I cannot deny I had some great times back then.”

On the other hand, he left no room for doubt that there would be no backsliding. Especially not after the birth of Jack Henry, his son – 18 months old at the time of our conversation – with his then-wife Meg Ryan.

“Let's put it this way,'' Quaid said. “I was living on the edge. And I decided that enough was enough. I come from a time -- the '60s, that generation -- when, to put it bluntly, drugs and alcohol were a lot of fun. And then fun with problems. And then it was just problems.

“For myself, I had to just stop and take account of my life, and then sort of re-create a new life for myself. For over three years, I'm clean and sober now. And it's a brave new world, it's great.

“And of course, now I realize, man, there's absolutely no way you can have a baby and be loaded. It would be near to impossible. Plus, there's also that question of that chain that's broken now, as far as alcohol and things like that go. (Jack Henry) doesn't have to grow up around this. That's a tough thing to do, growing up in an alcoholic family.''

Ten years later, Quaid continued to sing the praises of the straight life while on location near Austin to film The Alamo

. At the time, he was enjoying a career upswing that began with Frequency

(2000) -- a time-tripping sci-fi drama in which he played a father whose fate is altered by his loving son – and continued with back-to-back successes in two 2002 releases: John Lee Hancock’s The Rookie

, a surprise box-office hit in which Quaid played real-life baseball phenom Jim Morris, the oldest rookie MLB pitcher to take the mound in 40 years; and Todd Haynes’ Far from Heaven

, a glossy melodrama that showcased Quaid as the repressed homosexual husband of a pampered ’50s housewife (Julianne Moore).

The Alamo – which reunited him with Rookie writer-director and fellow Texan John Lee Hancock – turned out to be a critical and box-office bust. But Quaid earned a fair amount of praise for his vividly detailed performance as Gen. Sam Houston. And while making the film, he sounded very much like a man who was savoring every second of his second chance.

“After I went through rehab for cocaine and whatever, there was sort of a hard road back for me. I had to scramble for jobs. I really wasn’t doing the kind of work that I wanted to do. Back in the late ’80s, studios were offering me all kinds of things. I was sort of the golden boy for, like, 15 minutes. And then, all of a sudden, it was all gone, all taken away.

“After The Rookie with John Lee, of course, things got sweet again. And I appreciated that. That’s the big difference with me now: I appreciate the blessings that I’ve got in life. But I’m still rebuilding. And I’m in a good place now, just being an actor and doing what I love to do. I started out at the University of Houston, and I fell in love with acting. And I still feel that way about it. I think that’s maybe why I’m still around. Because I love what I do.”

The last time we chatted, while I was preparing a 2007 cover-story profile of him for Cowboys & Indians magazine, Quaid still sounded like a happy camper – albeit one who remembered his time spent in the dark side of the woods. So I asked him: If he could take advantage of the weird science imagined in Frequency, and somehow travel back in time to meet the young Dennis Quaid of, say, 1977 – what advice would he give that young guy?

“I would tell him to relax and take it easy,” he replied. “Have some patience.

“But of course,” Quaid quickly added, “he probably wouldn’t take my advice. See, that’s the deal: We’ve all got to make our own mistakes. Youth is never inclined to listen to experience. Everybody has got to go through what they go through.

“And they either get through it, or they don’t.”

Perhaps. Still, it would be wonderful if some people – if a lot of people – read Quaid’s Newsweek article, and took to heart the hard-won lessons he has to offer. As I said earlier, I greatly admire his honesty and resilience. And while I’m surprised that so many people seem to be surprised by what he wrote, never mind: Maybe some cautionary tales cannot be told often enough.
Posted by Joe Leydon at 4/12/2011 07:45:00 PM

So do tell me this: why is he a heavy drinker yet again? Has been seen out and about drunk in both LA and Austin repeatedly these past years. Even nearly got arrested for DUI about 2 yrs ago.

No, this guy ain't clean. He only drags this topic up again to get the sympathy vote from us.

Oh well, maybe at some point he will write essays about his other two vices: boozing and cheating.

Joe, I was a big fan of yours @ the Post when I lived in Texas.(80's)
I couldn't agree more with you on Flesh & Bone. Great movie and great performance.
Keep up the great work.

Yes, Quaid is a big time cheater. I personally know of someone who did the nasty deed with him about a year ago. He cheated on wife Meg Ryan & now on Kimberly. Don't understand why Kimberly stays with him, unless it's for the money. She can't be so ignorant as to not know about his cheating on her.