Flashback Review: Joe Versus the Volcano (1990) 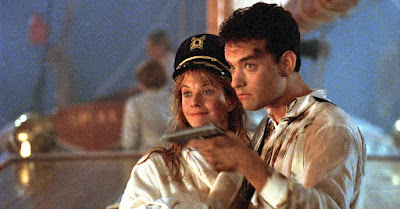 From the archives of  The Moving Picture Show.

March 9, 1990 |  If, as the poet noted, most men lead lives of quiet desperation, then Joe Banks (Tom Hanks) truly is an exceptional fellow: His desperately unhappy life is as noisy and dirty as it is oppressively, soul-killingly bleak.

Joe works as an assistant catalogue clerk for American Panascope, a company that claims hundreds of thousands of “satisfied customers” for its chief  product, petroleum jelly. In his grim, gray office in the factory  headquarters, the fluorescent lighting is relentlessly irritating, the air circulation is stiflingly poor, and the coffee is unspeakable sludge. His boss is a stony-faced despot who gruffly dismisses Joe’s complaints of poor health: “After childhood, nobody feels good. It’s a fact of life.”

One day, when his shakes and headaches are even worse than usual, Joe visits a doctor. And that’s when he gets some good and bad news. The good news is, none of Joe’s varied symptoms is a sign of serious illness. The bad news  is, an intense examination reveals Joe has something called a “brain cloud,” a malady entirely unforeseen and inevitably fatal.

Joe, ashen-faced and amazed, tries to make sense of the diagnosis: “I’m not sick, except for this terminal disease.” The doctor, played with just the slightest shading of lunacy by a straight-faced Robert Stack, nods sagely. “Your brain will fail,” he tells Joe, “followed shortly by your body.”

Most men would be hopelessly distraught, maybe even suicidal, after hearing such news. But, once  again, Joe is an exceptional fellow: He accepts the diagnostic death sentence as the start of his personal liberation. And that liberation in turn is the propelling force behind Joe Versus The Volcano, an epic comedy of goofiness triumphant and nuttiness unbound.

This fine madness is the masterwork of John Patrick Shanley, the esteemed playwright (Danny and the Deep Blue Sea) and Oscar-winning scriptwriter (Moonstruck) who makes his film directing debut with the first great movie comedy of the ‘90s.

There are hints of Metropolis to the Germanic expressionism of the early scenes, and touches of Joseph Campbell to the extended myth-spinning that leads Joe on a quest to live like a king before he dies like a man. And here, there and everywhere, there are bits and pieces of Arthur, The Odyssey and The Wizard of Oz.

More often than anything else, however, there is the imprint of John Patrick Shanley, a writer with a perfect-pitch ear for comically off-kilter dialogue, and an indefatigable gift for inventing full-bodied, vitally  contradictory characters.

Shanley’s last effort as a scriptwriter, The January Man, was a shaggy-dog story posing, unsuccessfully, as a cops-and-killer thriller, though the comic elements almost redeemed it. Joe Versus The Volcano wisely avoids all genre conventions and restrictions — it doesn’t try to be anything other than what it is. And what that is, is so exhilaratingly absurd, so outrageously  inspired, it is a tonic guaranteed to lift even the most crestfallen spirits. Even Joe might have laughed at it after a particularly lousy day at the office.

As Joe, Tom Hanks gives a beautifully precise and grandly funny reactive performance, responding to the eccentrics and oddities around him with equal measures of excitement, amusement and anxious befuddlement. Hanks is an extremely generous actor throughout, instinctively withdrawing to his corner of the screen whenever a co-star or a cameo player has a moment of glory.

Not long after Joe has his fateful medical exam, he’s approached by an overwhelmingly vivacious businessman, Graynamore, played with delightfully crackpot zest by Lloyd Bridges. Graynamore has a meticulously logical, financially alluring and altogether ridiculous proposition: Since Joe is going to die anyway, why doesn’t he do Graynamore a favor, and help the superstitious natives of a remote South Seas island, by jumping into an active volcano?

But wait, here’s the beauty part: Graynamore will pay all of Joe’s expenses, give Joe unrestricted use of gold-plated credit cards, offer Joe first-class travel and accommodations until he reaches the island of Waponi  Woo. (“The name means ‘Little island with a big volcano.’”) Once he arrives, the Waponi tribesmen will treat Joe like visiting royalty — and be really, really grateful that Joe, and not one of them, will make the big leap to appease the angry, lava-spouting god.

Graynamore, who figures to gain mineral rights to the island by providing a human sacrifice, makes a splendidly energetic pitch. Joe considers it for a few seconds, and says, in the matter-of-fact tone of someone agreeing to accompany friends to a ballgame, “Aw right, I’ll do it.” Hanks is generous, yes indeed, but he can swipe back an entire scene with a single line.

Shanley is every bit as generous, spreading the funny stuff around to everyone in the cast. Meg Ryan gets more than her fair share, but that’s because she plays three different roles: DeDe, a mousy secretary who briefly  basks in the glow of Joe’s new-found verve; Angelica, Graynamore’s glossily affected daughter, a would-be artist and half-hearted libertine; and Patricia, Angelica’s disapproving half-sister, the heroine who eventually tries to woo Joe away from his date with the volcano.

Ryan artfully rearranges the equation of sexiness, silliness and sensibility for each woman, so that each adds up to a very specific characterization. If When Harry Met Sally. . . made her a star, then Joe Versus The Volcano will keep Ryan in orbit.

In addition to Stack and Bridges, the wonderful supporting cast includes Ossie Davis as a chauffeur who’s reluctant to offer educated guesses about the meaning of life; Dan Hedaya as Joe’s preternaturally sour boss; and Barry McGovern, an Irish stage actor, as an intensely solicitous salesman who says luggage “is the central preoccupation of my life.” A good thing, too, since the trunks he recommends to Joe come in very handy.

Joe Versus The Volcano is a fairy tale in the old-fashioned Hollywood tradition, informed by a subversively absurdist sensibility. Shanley and  production designer Bo Welch (Beetlejuice) have created their strange new  worlds on studio sound stages, so that everything — shipwrecks, tropical islands, a glorious moonrise at sea — is flagrantly artificial, and altogether magical.

The Waponi Woo natives are among Shanley’s most inspired inventions: Tribesmen who guzzle orange soda, count Hebrews, Druids and Polynesians among their mixed ancestors, and greet visitors to their island with a hearty rendition of “Havah Nagila!”

Joe Versus The Volcano is so audacious in its daffiness, you may have to see it twice. The first time, you might not believe anything could possibly be that funny.