Before there was The Undefeated, there was Journeys with George 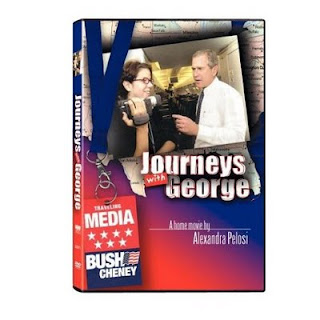 With all the coverage being generated this weekend by the Sarah Palin documentary, I'm reminded of a delicious irony regarding another movie about another polarizing Republican: Journeys with George

, arguably the most sympathetic film ever made about George W. Bush, was directed by... Nancy Pelosi's daughter. No, really.

When I reviewed it for Variety at the 2002 SXSW Film Festival -- at a time when then-President Bush was near the peak of his post-9/11 popularity spike --  I noted: George "recalls a time not so long ago when the untested son of President No. 41 was considered even by some Republicans to be an intellectual lightweight sorely lacking in presidential gravitas. [The documentary] strongly suggests that Bush's image as a callow boob was only partially justified and likely was much more apparent than real."

The film started out more or less as a pastime for director Alexandra Pelosi, "shot during downtime from her duties as a producer for NBC News. At first, she's simply one of the faceless dozens among the print and TV journalists on a shaky Access Air plane -- which, Pelosi pointedly notes, is usually used to transport convicts. (A much nicer aircraft is provided once Bush actually nails the Republican nomination.) But a funny thing happens along the campaign trail: The more she aims her mini-DV camera at Bush between stump speeches and photo ops, the more the candidate opens up while noticing, and gradually befriending" the first-time filmmaker.

At its frequent best, I wrote, the documentary offered audiences "a golden opportunity to witness the 'unplugged,' after-hours George W. Bush at his most congenial. George offers a portrait of a gregariously charming and self-mocking fellow who's perfectly at ease in his own skin, and who's no less slick and savvy a politician for being willing to make himself the butt of jokes. Indeed, at one point, he even goes on the press plane loudspeaker to mock his own verbal gaffes at the last campaign stop."

I caught a good deal of heat from a few of my liberal friends -- and was somewhat snidely criticized, years later, by no less an august personage than James Wolcott -- for concluding: "At first, Bush's handlers try to keep the candidate inaccessible to the press pack. But after he loses a few primaries to rival John McCain -- whose half-hearted speech in support of Bush is screamingly albeit unintentionally funny -- the candidate suddenly becomes accessible, unplugged -- and indefatigably charming.

"It's been reported some of President Bush's current handlers are worried that Journeys With George will make Dubya look somehow 'less presidential.' Actually, the only thing they have to complain about is the timing of the [documentary's] release: Had it appeared prior to the 2000 election, there likely would not have been any disputes over the Florida vote count, because Bush's electoral victory would have been all the more resounding."

I still stand by that last sentence, despite everything that unfolded during President Bush's two terms in office. It continues to annoy the hell out of many people -- hey, it annoys the hell out of me -- but a key to the guy's success as a candidate in 2000 was what can only be described as his regular-guy charm. Mind you, I've always been immune to that charm -- so much so, in fact, that I took time off from attending the Fort Lauderdale Film Festival  on Election Day 2000 to do volunteer work for a local Democartic Party "Get out the vote" effort. (That's right -- I was at Ground Zero in Broward County when the chads started hanging.) But Journeys with George enabled me to better understand why other voters might have opted to cast their ballots for someone who... who... well, who proved that, hey, in this country, anybody really can grow up to become the President.
Posted by Joe Leydon at 7/17/2011 01:35:00 AM