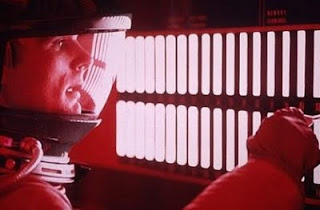 On the occasion of the end of the space shuttle program, I offer these concluding paragraphs of an essay I wrote back in 2004 for my book Joe Leydon’s Guide to Essential Movies You Must See

. My mood: Somewhere between bittersweet nostalgia and rueful resignation.

continues to serve as shorthand for a dystopian vision of technologically-enhanced totalitarianism, 2001 retains its mythic resonance – an optimistic prediction of first contact with other, presumably wiser, life forms -- long after people stopped scribbling that cluster of numbers in checkbooks. Instead of inspiring awe, however, the film itself now is more likely to evoke a kind of wistful melancholy that Kubrick never intended. It’s sad, but true: These days, we simply don’t view interstellar exploration with the same wonder-fueled enthusiasm shared by Kubrick and millions of others back in 1968.


To be sure, there’s the occasional media frenzy about images beamed from Mars by unmanned spacecraft. And there’s always a ready audience for every new chapter of the Star Wars franchise. But with each passing year, it’s increasingly more difficult to imagine that anything short of a real-world appearance by a beckoning Monolith would re-ignite our intergalactic wanderlust. All you have to do is read news accounts of petty Congressional squabbling over NASA funding, and you’ll realize that, never mind what the calendar might tell you, we’re still a long, long way from the bold new age of discovery we were promised all those years ago.
Posted by Joe Leydon at 7/21/2011 12:27:00 PM