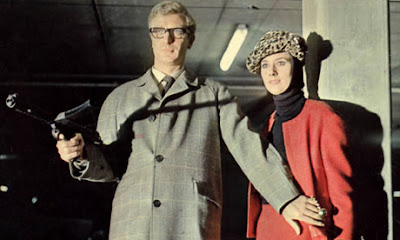 My sincere condolences to the friends and family of Sue Lloyd, the talented Brit actress who passed away Thursday at age 72 -- and who, at the zenith of her va-va-voom hottiness back in the 1960s, had a profound effect on me. No kidding. In The Ipcress File, she played a secret agent who vamped fellow spy Harry Palmer (Michael Caine) during what was, by '60s standards, a torridly sexy scene.

Lloyd: Do you always wear your glasses?
Caine: Yes. Except in bed.
Lloyd removes Caine's glasses. Fade to next scene.

A few weeks after I saw Ipcress File for the first time -- in 1965, during my freshman year of high school -- I had an eye exam, and was told by the examiner that I was near-sighted and would have to wear glasses. Most guys my age usually whined and complained when given that news. I think the examiner was very surprised when all I did was smile.
Posted by Joe Leydon at 10/23/2011 10:53:00 PM