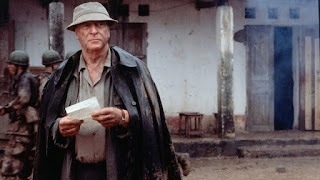 From a 2002 interview: Michael Caine is, by his own admission, “a news junkie,” the kind of compulsive who’ll reflexively tune his TV to CNN during any lull in a day’s activities. Which is why, on the afternoon of Sept. 11, 2001, while he sat in his London home office, waiting for word from director Phillip Noyce about the previous evening’s New Jersey sneak preview of The Quiet American, he found himself transfixed by the aftermath of the first assault on the World Trade Center.

Then he saw the second plane’s approach.

“And my first reaction,” Caine recalls, “was, ‘Jesus, that’s quick.’ Because, you see, I thought it was one of those planes like they have in California that drop the powder on the forest fires. I thought that’s what this plane was for. And it had only been about a quarter of an hour or 18 minutes since the other plane had hit the building. So I thought, ‘Wow, They got that plane up there so fast, to drop powder on that fire.’

“But then it went straight into the tower.

“And at first, none of it registered. I felt like, OK, I’m not a moron – actually, I feel I’m quite bright. But I was sitting there, stunned, thinking something like, ‘What happened here? It didn’t drop any of that powder, did it?’ It was only about two seconds, I know, but it seemed to me like half an hour. And then I saw the flames – that big woosh! – come out of the building...”