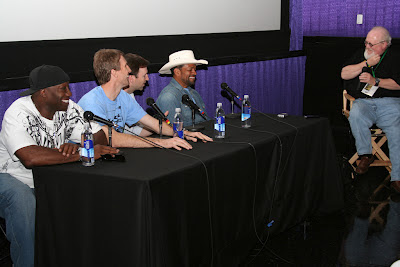 I had the pleasure to speak with Michael Clarke Duncan on a few occasions at junkets and film festivals – most recently two years ago at the Nashville Film Festival, where I served as host for an on-stage Q&A after the premiere of Black, White and Blues, an enjoyable indie dramedy later released in theaters and on DVD under the title Redemption Road. (That’s me on the far right, Duncan on the far left – and director Mario Van Peebles in the white hat – up there.) In person, he always struck me as a gregarious and good-humored fellow with a hearty laugh, an effortless charm and an engagingly self-deprecating sense of humor. And on the screen, I’m not sure that I ever saw him sound a false note, or make a wrong move, whether he was a hulking badass (Daredevil) or a saintly martyr (The Green Mile).

In Nashville, he only half-jokingly noted during our well-attended Q&A that, prior to Redemption Road, he had no desire – no desire at all, thank you very much – to ever wear a cowboy hat. Indeed, he agreed to don one in that film only because director Van Peebles convinced him that it was an essential part of his down-home character’s everyday wardrobe. Once he found one that fit, though, Duncan had to admit: He thought it looked pretty damn cool on him. And guess what? He was right. Check him out here: