Blast from the past: My 1982 interview with Les Blank about Burden of Dreams

(Note: To celebrate the life of Les Blank I am sharing this interview I did with him at the 1982 Toronto Film Festival -- the very first Toronto Fest that I ever attended.)

TORONTO – In the lobby of the Bloor Theater, an unassuming fellow stands behind a small counter. Bearded and robust, looking much like a slimmed-down Santa Claus, he personally displays his wares: T-shirts emblazoned with the titles of films directed by Les Blank.

Inside the theater itself, a Blank film is currently unspooling. On the screen, a man rambles on about his obsessions. He’s been in the Peruvian jungle for far too long, trying to complete his work. He’s now near the end of his rope. His financial backers are pulling out. His crew is discontent, almost mutinous. Even the elements are against him.

“I see it as full of obscenity,” he says, the hysteria barely repressed. “Nature here is base and vile. The birds. I don’t think they sing. They just screech in pain…

“I shouldn’t make movies anymore. I should go to a lunatic asylum.”

The Toronto Film Festival audience responds to his monologues with smatterings of giggles, occasional gales of laughter. But some people are shifting nervously in their seats. A few actually get up and leave.

There’s an ineffable uneasiness shared by those who remain to watch the film. Because the man on the screen isn’t a professional actor. And he’s not reciting words from a script. And the film itself is not a work of fiction.

The film is Burden of Dreams, a record of German director Werner Herzog’s efforts to complete his long-delayed epic, Fitzcarraldo. Herzog is the man on the screen, railing against the elemental forces that have interfered with is work.

Most members of the audience are clearly engrossed, and maybe a little disturbed, by the film. And when they file into the lobby after it ends, they receive yet another shock. The man behind the counter selling T-shirts isn’t a mere peddler. He’s Les Blank.

THE NEXT MORNING AT HIS HOTEL, Blank smiles at the arrival of an interviewer wearing a Burden of Dreams T-shirt. He’s glad his visitor liked the film and the T-shirt. He hopes his visitor will recommend both to many others.

Sometimes an independent filmmaker must rely on all sorts of supplementary income. But Blank may not have to hawk T-shirts much longer. Burden of Dreams could well be his breakthrough film, a surprise hit that somehow survives the stigma of being labeled a “documentary.”

“Actually,” Blank says in his soft, unassertive tone, “I don’t like the term documentary.’ Because it implies the film is dull and boring, like something you were forced to watch in school or in the Army. Or if it’s on TV, it’s something that’s been predigested for you. The documentaries on TV gloss over everything, even though they pretend they’re telling the truth about a subject.”

Blank’s film is nothing if not ruthlessly honest. Burden of Dreams, described by one critic as “a chilling chronicle of artistic obsession,” has aroused considerable controversy with its warts-and-all picture of Werner Herzog at work.

Rumor has it that director Volker Schlondorff, one of Herzog’s best friends, tried to buy and destroy the film after seeing footage from it at the 1981 Telluride Film Festival.

“People got real bent out of shape there,” Blank recalls, “because the footage was shown out of context. You saw Herzog raving in the jungle against nature. But you didn’t see what had driven him to that point.”

The complete version of Burden of Dreams places everything in its proper context. The film follows Herzog from pre-production to completion of Fitzcarraldo, a fact-based adventure about the eponymous Irishman’s efforts to build an opera house in the Amazon River port of Iquitos during the early 1900s. To finance his dreams, he sets out to become a rubber baron, laying claim to unexploited land far upriver.

It appears impossible to navigate the treacherous rapids near Fitzcarraldo’s land. But that doesn’t stop our hero. He discovers a navigable river winds within a kilometer of the impassable waterway. So he concocts a plan to have Indian laborers pull his huge steamship over a hill between the two rivers.

Sounds difficult? Maybe so. But it wasn’t difficult enough for Werner Herzog.

Rather than film on a site near the relative comforts of Iquitos, Herzog chose to film 1,500 miles north of the city. That way, Herzog figured, his cast and crew would share the sense of isolation felt by Fitzcarraldo and his party. Herzog didn’t stop there. The real-life equivalent of the Fitzcarraldo character had his steamship dismantled and carried to the other side of the hill, where it was reassembled. But such a plan did not strike Herzog as visually impressive. In order to have the right “visual metaphor” for his hero’s obsession, the director insisted his steamship be dragged intact across the hill.

The engineer in charge of the transportation insisted a 20-degree slope should be the limit. But Herzog would not be moved. “Unless we do 40 degrees,” Herzog said, “we might as well not bother with a hill at all.” The engineer quit in protest. Herzog got his 40-degree angle.

But Herzog didn’t get his original leading man.

“At first,” Blank says, “he was aiming for a large-scale, popular English-language film. The original actor he wanted was Jack Nicholson. And he came very close to getting him. But I think Nicholson’s producer wanted some control that Herzog didn’t want to give.

“His next choice was Warren Oates. But, two weeks before shooting was to start, Oates dropped out. I think Oates’ wife was freaked out by the possibility of dangers in the jungle. Probably with good reason.”

Footage shown in Burden of Dreams indicates Robards and Jagger worked well together. But audiences will never know for sure. After about 40 percent of Fitzcarraldo was shot, Robards was struck with amoebic dysentery and left the picture. Filming was halting, causing considerable delay. Jagger was forced to leave Peru to fulfill recording and concert commitments. 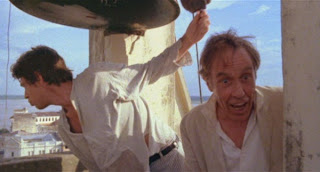 Mick Jagger and Jason Robards in the Fitzcarraldo that never was.

Herzog was crushed. “I think,” says Blank, “a lot of his financial backing was based on Jagger’s participation. And it was Jagger’s withdrawal, more than anything else, that really hurt him, because that made a lot of the investors pull out their money.”

Klaus Kinski, a veteran of Herzog’s Nosferatu and Aguirre, The Wrath of God, was eventually called in to replace Robards. The Jagger character was dropped from the script, supposedly because Herzog could not conceive of anyone else playing the role. “Or it could have just been expediency,” Blank says, “to get going as soon as possible.”

Fitzcarraldo did get going again, careening across a minefield of misadventures. Indians hired as extras battled with neighboring tribes. A plane crash left one crew member permanently paralyzed. Four natives hired to work on the film died of illnesses they contracted outside the location. Another native drowned after “borrowing” a canoe and capsizing. Disgruntlement and paranoia mounted as the production dragged on. Indians long separated from their wives became cranky.

Was Blank ever afraid? Several times, he says.

“There was one point, early in the game, when some of the Indians working with us were attacked by hostile Indians from the next territory. And a war party was gotten up to avenge the attack. Herzog felt I should go along on that raiding party.

“Now I was not really interested in going. But, on the other hand, I didn’t want to let Herzog think I was a coward, because then he might lose respect for me. So I told him I’d go if he would go, hoping he’d say, ‘No, I don’t have the time.’ But he said, ‘Very well, we’ll meet at dawn.’

“I couldn’t sleep all night long. I didn’t know what I was going to do. Then, in the morning, Herzog came by and said he wasn’t going. First of all, it was a three-day trip by boat, and he couldn’t take the time off from shooting. And secondly, it wouldn’t look good for his international reputation to be seen participating in a raiding party on an Indian camp.

BLANK WASN'T QUITE SO LUCKY later in the filming, when Herzog wanted to show how Fitzcarraldo’s steamship was buffeted by the rapids.

“This tremendous collision threw me to the deck. Then they backed up, and started revving up to do it again, moving twice as fast. I thought, ‘My God, these people are really crazy.’ I hung on for my life – I didn’t even try to shoot.” The filming was scarcely less eventful after the production moved from the jungle to Iquitos. Indeed, it was in Iquitos that Herzog nearly lost another leading man.

“Toward the end of the shooting in Iquitos, Kinski thought he’d done a part right, and Herzog wanted him to repeat it. And Kinski didn’t. They had a lot of friction at that point. And Herzog said, ‘Very well – we’re not going to leave until you come back and redo the scene.’ Kinski went back to his hotel.

“But the Indians at this point got fed up, because they’d stuck with the production all the way along. They felt all their efforts were being jeopardized by this guy who refused to act. So the word got around that they were going to kill Kinski.

“This got back to Kinski. So he came back and did his part.”

Me and Les Blank at the 2009 Nashville Film Festival

Finally, after long months of hardship and danger, Fitzcarraldo was completed. Earlier this year, it was shown at the Cannes Film Festival, where it premiered to generally favorable reviews. Blank has seen Herzog’s film, says he likes it “a lot,” but concedes “it’s on the long side.” Herzog has seen Blank’s film, “didn’t find any of it boring,” and didn’t ask for any cuts to be made.

Blank and Herzog have remained friends, despite a few tense moments on the Fitzcarraldo set. And Blank remains an admirer of Herzog’s work. But could Blank ever become as obsessed as Herzog was during the making of Fitzcarraldo? No way.

“I’m a different type of person,” Blank explains. “I’m lazy. Also, to me, a film is not more important than life. But it is to Herzog.” 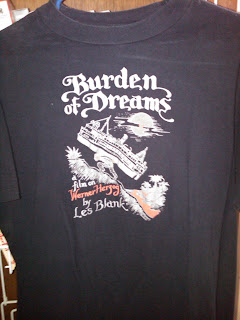 Yes, I still have the T-shirt!
(And I was wrong: Blank kept selling them, thank goodness!)