Somewhere in that great screening room in the sky, Roger Ebert is offering a thumbs-down to this crowd 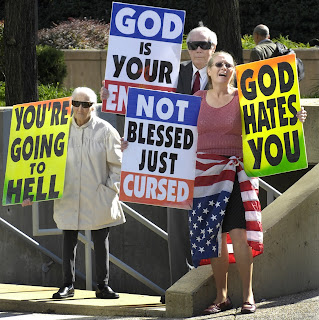 Oscar Wilde once noted: "You can always judge a man by the quality of his enemies." I think Roger Ebert -- and, come to think of it, Oscar Wilde -- would be amused to know that hatemongers from the Westboro Baptist Church, the sort of "Christians" who give Christians a bad name, plan to protest at Roger's funeral. Why? Hey, why not. Haters got to hate, right?

On the other hand: I would advise these haters to stay clear of my own funeral after I shuffle off this mortal coil. See, I figure there will be a bunch of sorely hung-over Irishmen at this event, all of them barely recovered from the revelry of what I expect to be a robust Irish wake the night before. And since I suspect more than a few of these fellows will be former IRA confederates of my late father, they'll likely be packing heat. Think about it, Westboro Baptists: Cranky Irish dudes with guns. They'll not be patient with the scurvy likes of you.
Posted by Joe Leydon at 4/07/2013 09:17:00 PM

Hopefully Joe, that won't be for a very long time! You're about all we have left of the old timers(or classics, if you prefer). Maybe the lunatic fringe will be gone by then. I like to think out-living them is the best revenge!