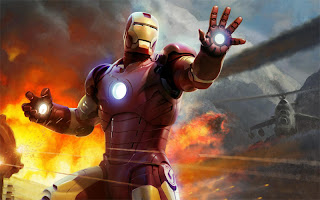 Don’t know about you, but if I’d recently tangled with gadzillions of unfriendly extra-terrestrials, and flown through a worm-hole to dispose of an inconvenient nuclear missile, and almost crash-landed in the middle of Manhattan before being snatched and saved in mid-air by The Incredible Hulk – and did all those things while worrying whether the electromagnetic dingus secured on my chest would continue working properly, and keep bits and pieces of shrapnel from piercing my heart – I think I might find myself prone to anxiety attacks for weeks, if not decades, afterwards.

Which is one of the reasons why, right from the get-go, I had an unreasonably good time with Iron Man 3, the first big blast of the summer movie season. As Tony Stark, the super-rich, ultra-cool brainiac inside the red-and-gold Iron Man armor, Robert Downey Jr. usually comes across as almost arrogantly insouciant and unflappable -- the snarkiest hipster ever to do derring-do in a comic-book movie. So it’s a nifty change of pace – and, yes, an effectively humanizing touch – for Downey to appear beset by spasms of post-traumatic stress during the first several minutes of this new movie while Stark recovers from all the sound and fury (and the demands of S.H.I.E.LD. boss Nick Fury) that defined The Avengers.

Of course, you can’t keep or a good man – or, to use Stark’s own self-deprecating phrase, a man in a can – down for very long. But even after Stark shakes off the funk and gets into gear, Iron Man 3 indicates that everyone involved in this sequel wanted to add a few new pages to the playbook, or at least take a couple detours while covering familiar ground.

Stark actually spends long stretches of the flick outside of his armor while tracking down The Mandarin (Ben Kingsley), a fearsome international terrorist who evidently took grooming tips from Osama Bin Laden, and Aldrich Killian (Guy Pearce), a brilliant scientist whose bad intentions are so obvious – even during the opening scenes, set in 1999, when he’s supposed to be a needy and nerdy Stark worshipper – that I feel entirely safe in announcing without a spoiler alert that, yeah, he’s no damn good.

Iron Man 3 often has the pleasurably anything-goes air of a '70s James Bond movie as Tony Stark goes globe-trotting after clues and connections, all the while dressed in civilian attire, and even karate-chops a bit-player or two. (The 007 flavor is enhanced at the very end with a wink-wink on-screen promise: “Tony Stark will return…”) Indeed, like Bond, Stark relies on his wits as much as he utilizes gadgetry. For a while, at least.

And then… well, hey, this is an Iron Man movie, right?

The plot has something to with a limb-regenerating therapy that has rather unfortunate side-effects – some human guinea pigs turn into incendiary bombs and/or villainous variations of The Human Torch – and something else to do with a beautiful research scientist (Rebecca Hall) who may not be entirely unhappy about how her breakthroughs are ruthlessly exploited.

There’s an audaciously ingenious plot twist at the midway point that may shock and upset those who view Marvel Comics mythos as sacrosanct – and, come to think of it, might also additionally peeve people already queasy about the use of terrorist mayhem as a comic-book movie plot device. But it will greatly amuse just about everyone else. (More than that, alas, I cannot tell you.)

And there’s a very welcome and largely successful effort on the part of director and co-scriptwriter Shane Black (Kiss Kiss Bang Bang) to elevate the relationship between Stark and gal pal Pepper Potts (Gwyneth Paltrow, a.k.a. The World’s Most Beautiful Woman) to the level of a compellingly passionate romance. (Jon Favreau, director of the first two Iron Man adventures, has stuck around to continue playing Happy Hogan, Stark’s bodyguard.) It also helps, by the way, that Pepper gets more actively involved in the action this time around, and Paltrow is more than up to the challenge.

The pacing is appropriately propulsive, the action sequences – especially Iron Man’s rescue of passengers rudely ejected from Air Force One, and a climactic confrontation involving mammoth explosions, massive destruction and an entire posse of Iron Man suits – are satisfyingly rousing, and the comic relief is frequently and refreshingly laugh-out-loud funny.

Granted, the narrative logic is something less than watertight, and a few plot developments are, at best, fuzzily finessed. To be honest, I’m still trying to figure out why Don Cheadle’s War Machine – here rechristened Iron Patriot, and tricked out with a red-and-white-and-blue paint job – is so easily immobilized without doing lasting damage to his high-tech hardware.

But never mind. Truth to tell, I sometimes have a hard time with the narrative logic (or the lack thereof) in James Bond movies, too. And that’s never gotten in the way of my having a good time – most of the time – with that franchise.

With Downey cracking wise in his trademark fashion while fighting the good fights, Paltrow and Kingsley at the forefront of a first-rate supporting cast, and a whole mess of stuff blowing up real good, Iron Man 3 is a super-sized comic-book epic that’s licensed to thrill.