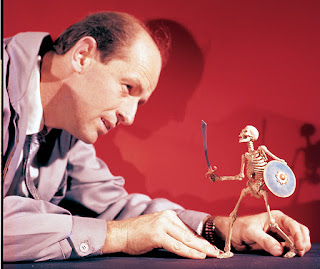 I was tempted to begin this tribute with the standard "If you're of a certain age...," but quickly came to my senses. Because, really, movie buffs of all ages have at one time or another been excited, scared and/or downright discombobulated by the movie magic of the late, great Ray Harryhausen, who passed away Tuesday at the ripe young age of 92.

Mind you, I think you likely were even more amazed by his stop-motion handiwork if you saw it for the first time on the big screen back during the pre-CGI era, when the skeleton sword fight in Jason and the Argonauts (1963), the multi-tentacled assault on San Francisco in It Came from Beneath the Sea (1955), or even the original releasing of the Kraken in the first Clash of the Titans (1981) could leave indelible impacts on impressionable moviegoers. (OK, I admit: I saw the first two of those three movies during what used to be known as "kiddie matinees" after I saw them on TV -- but never mind, they still were pretty damn astonishing.)

But I suspect Harryhausen's very special effects will always appeal to the child in all of us, with an enduringly potent capacity to ignite our sense of wonder.

Get a load of this:


And take a look at that: