The director of an anti-Obama documentary indicted on campaign fraud charges? Wow, didn't see that coming! 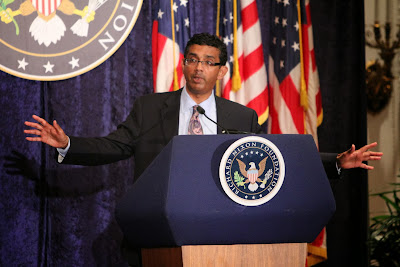 From The Raw Story: "Conservative filmmaker and author Dinesh D’Souza was indicted in federal court on Thursday for allegedly arranging for $20,000 worth of campaign contributions — far above legal limits, Reuters reported.

"The indictment did not name the candidate benefiting from the donations, but the Federal Bureau of Investigations (FBI) accused D’Souza of reimbursing others in August 2012 for making the donations in his name, enabling for them to be falsely reported to the Federal Elections Commission (FEC). Taken together, the charges carry possible penalties of up to seven years in prison...

"D’Souza, a former president at King’s College, was fired from the Christian-affiliated university in October 2012 after being spotted traveling with a woman who was not his wife.

"He was also behind the documentary 2016: Obama’s America, which drew surprisingly well at the box office thanks to support from conservatives. While promoting the film, D’Souza accused President Barack Obama of harboring 'Charles Bronson rage, vigilante rage.'”
Posted by Joe Leydon at 1/23/2014 06:55:00 PM

Experiencing quite the case of schadenfreude right now!