Life Itself -- Roger Ebert in the role of a lifetime 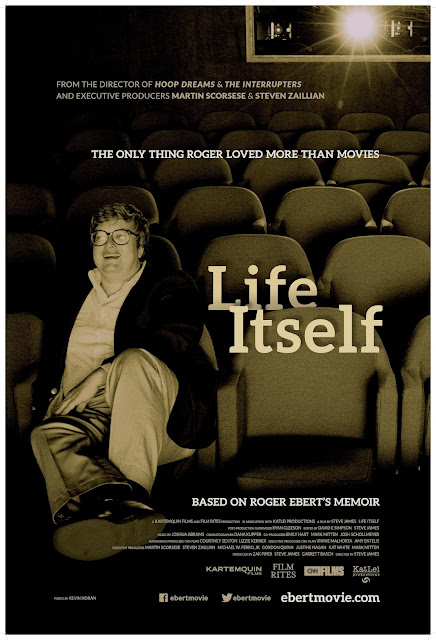 Thanks to the miracle of modern technology, I have just now been able to view a downstream of Life Itself – Steve James’ extraordinary documentary about the late, great Roger Ebert – at the same time the film had its world premiere at the Sundance Film Festival.

I promise to write about the movie in greater detail further down the road, after I have had a chance to think about it more and, in all likelihood, view it again. But please indulge me as I share a few first impressions.

For openers: Roger and I were not bowling buddies, and I would be grossly overestimating the intimacy of our relationship if I said we were extremely close confidants. But our friendship was a long and mutually respectful one. (“I first met my old friend Joe Leydon when he was the film critic of the Houston Post,” he wrote in 2009. “When we see each other at the Toronto Film Festival, we are usually the oldest active critics in the room.”) And we were close enough for me to contact him when I was diagnosed with prostate cancer a few years back, and for him to offer me not only sympathy and encouragement, but also a few good laughs as I underwent radiation treatments.

(Roger always had a great sense of humor – and often made himself the butt of his own jokes. At one point in Life Itself, you can hear him remembering his first reaction to a theater poster for Russ Meyer’s notorious Faster, Pussycat! Kill! Kill! “The poster displayed improbably buxom women,” he says, “and I was inside in a flash.”)

So when I say that Life Itself offered me a welcome opportunity to share quality time with an old friend, well, that’s only because it did. And for that, I am immensely grateful.

I also am grateful for the honesty and balance of James’ film. And no, I am not talking just about the way Life Itself details Roger’s battle with alcoholism, or his sometimes petty, sometimes vitriolic disputes with fellow critic Gene Siskel. (One of the more fascinating things in the documentary is an outtake from a taping session where it appears the wordsmiths might eventually come to blows as first one, then the other, flubs a blurb for an upcoming show.) I am impressed by the way James faces head-on the long-standing, still-raging dispute over whether Ebert and Siskel somehow “cheapened” film criticism with their reliance on quick quips and flexible thumbs.

Of course, I stand firmly on the side of those who will always praise them for raising the profile of indies and documentaries through their coverage of these and other “art house” releases on their nationally syndicated program. But Life Itself gives fair time to the counter-argument posed by the naysayers represented here by Jonathan Rosenbaum (formerly of The Chicago Reader). It’s not really James’ fault that Rosenbaum comes off as a snobbish scold.

Another thing: Life Itself  very often recalls L.P. Hartley’s oft-quoted line – “The past is a foreign country: they do things differently there” – as it harkens back to a time when film critics like Roger Ebert, Gene Siskel, Pauline Kael and Andrew Sarris were influential figures in popular culture, when critics actually could play vital roles in helping launch and sustain the careers of great filmmakers. Martin Scorsese (who served as one of the documentary’s producers) is deeply affecting as he speaks in Life Itself about Roger’s early review of his debut feature, Who’s That Knocking at My Door?  His heartfelt words make you appreciate Roger Ebert all the more – but also make you wonder who, if anyone, has the credibility and influence today to launch the next generation of filmmakers.

After seeing Life Itself, I immediately Tweeted: “A smart and moving tribute to an irreplaceable critic and a singular human being.” I’m sure Roger could have phrased it better. (After all, he was Roger Freakin' Ebert.) I wish he were still around to do so. But I guess I’ll just have to settle for reading, and re-reading, all the wonderful words he left us with. And when even that is not enough... well, we'll always have Life Itself.
Posted by Joe Leydon at 1/19/2014 09:43:00 PM

Thx, Joe- I think I have some standing in this conversation as each of you reviewed my first movie at your respective papers in 1975, he a bit more positively than you, as I recall. Anyhow, I am sorry he is not with us any more, and glad that you are, and that I am, too. A lovely piece, and thanks for it. Jonathan Dana, Los Angeles

Actually, in 1975, I was still living in New Orleans, and writing part-time for the East Orleans News, a suburban newspaper. But thanks for the kind words.