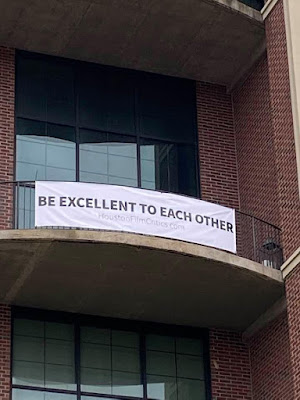 As we muddle through the current lockdown, Doug Harris, president of the Houston Film Critics Society, has been lifting his and other people’s spirits by hanging on his balcony banners emblazoned with quotes from classic movies. He’s also been encouraging fellow HFCS members to post reviews of spirit-lifting movies available for streaming. Therefore, suitably inspired by my favorite currently sitting president: Here is my original 1989 review of Bill & Ted’s Excellent Adventure. Totally, just as it appeared back in the day in The Houston Post.

How far can a comedy get on a single joke? Just about 90 minutes, judging from Bill & Ted's Excellent Adventure, an exuberantly goofy farce sprinkled with moments of inspired silliness.

The plot is simple, if not simplistic: Two chuckleheaded teen-agers, Bill and Ted, are given a magical telephone booth that allows them to travel back and forth in time. The gift arrives at a fortuitous moment — the boys are in danger of flunking a history class, and they need some impressive exhibits to ace their final exam. So off to the past they go, to corral Napoleon, Socrates, Joan of Arc, Billy the Kid and assorted other “personages of historical significance.”

Scriptwriters Chris Matheson and Ed Solomon obviously are fans of Fast Times at Ridgemont High, and fondly recall the scene where an awesomely stoned surfer (played by Sean Penn) took a make-up test in American history. Bill & Ted offers two Valley Guy students instead of one, and allows them unrestricted use of an amusingly polysyllabic vocabulary: “Ted, it’s pointless to have a triumphant video until we have decent instruments!” “We are about to fail most egregiously, Bill!”

Bill (Alex Winter) and Ted (Keanu Reeves) are the heroes of the piece, would-be rock musicians who react with amazing sang-froid when a futuristic visitor (George Carlin) makes the past available to them. Occasionally, the boys are slightly rattled by what they encounter in their time-travels. (“Whoa! Check it out! We're in the middle of a war, dude!”) More often, though, Bill and Ted are highly entertained, if not noticeably educated, by their first-hand research.

Under the energetic direction of Stephen Herek (Critters), Bill & Ted gets by on high spirits even when its invention flags. There is a very funny sequence that places the “historical personages” in a shopping mall — Joan of Arc joins an aerobics class, Beethoven tickles the ivories at a music store, Billy the Kid and Socrates try to pick up girls. The finale, staged very much like a heavy metal concert, is guaranteed to please the party animals in the audience when Bill & Ted makes its inevitable debut on the midnight movie circuit.

To be sure, there are a few slow stretches where time is marked and patience is tested. Overall, though, Bill & Ted’s Excellent Adventure is an exceedingly pleasant surprise. And the best moments are those where our heroes try to interpret history in their own terms. Socrates, they figure, lived in ancient Athens, “when most of the world looked like the cover of the Led Zeppelin album, Houses of the Holy.”