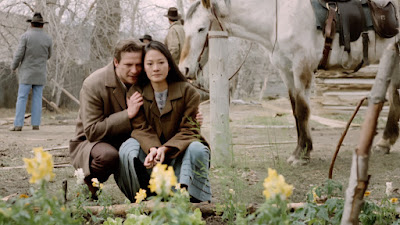 At long last: Kino Lorber is re-releasing at virtual theaters Friday, April 24, through May 7, Thousand Pieces of Gold. This is my January 3, 1992, Houston Post review.

Nancy Kelly’s Thousand Pieces of Gold is billed as “a testament to the strength of the human spirit,” but don't let that keep you away. This exceptionally fine, independently produced film is a small-scale, clear-eyed, sharply observant drama that, among other notable things, does something movies do very well, but all too infrequently: It offers the audience a vivid and involving look at a fascinating chapter in American history that usually is relegated to the status of footnote.

The title refers to the price paid one morning in 1880 when a desperate farmer in famine-stricken northern China sells his adolescent daughter, Lalu (Rosalind Chao), to a marriage broker. Lalu is summarily shipped off to San Francisco, where she is purchased by Jim (Dennis Dun), the eager-to-assimilate agent of Hong King (Michael Paul Chan), an even more coldly pragmatic Chinese immigrant. King operates a saloon in the Idaho mining town of Warren’s Diggens, and he wants to offer the local “white demons” something more exotic than beer and whiskey. Lalu, renamed China Polly by her new “owner,” is expected to work as a prostitute.

But Polly refuses to be exploited in such a way, and, unsurprisingly, has the gumption to back up her protests with a knife. Angry, but also a little impressed, King forces her to work as his personal slave, to pay off the cost of her purchase. Polly turns out to be a worker of indefatigable energy and endless resourcefulness. She quickly earns the respect, and slowly wins the love, of the one white man in town who fully understands what it means to be a prisoner: Charlie (Chris Cooper), a taciturn Civil War veteran who survived the horrors of Andersonville.

Working from a 1981 novel by Ruthanne Lum McCunn, which recounted the life of the real “China Polly,” director Nancy Kelly and screenwriter Anne Makepeace take a straightforward but sympathetic approach to Polly's story, viewing the strange new world of the Idaho mining town through the eyes of their feisty heroine, but also allowing other characters to develop and reveal themselves. Thousand Pieces of Gold unfolds at an unhurried pace, but it never seems dull, because the events and details that it takes time to observe are often richly amusing, sometimes suspensefully gripping, and always utterly engrossing.

Rosalind Chao dominates the film, as well she should, with her strong, subtly detailed performance as Polly. By turns frightened and bewildered as she enters Warren’s Diggens, Chao's Polly nonetheless maintains a strength of will that makes it very clear, right from the start, that no man — not even Charlie, not even after he “wins” her from King in a poker game, then grants her freedom — will be able to have her on any terms but her own.

Charlie, who seems bemused and perhaps a bit proud as Polly develops into an entrepreneur, is played with winning self-effacement by Chris Cooper (the union organizer of John Sayles’ Matewan). Hard-drinking and war-weary, yet always a gentleman in his dealings with Polly, and a fair businessman in his dealings with King, Charlie is a complex character, and Cooper is remarkably good at bringing his many facets into sharp focus.

Thousand Pieces of Gold touches upon the injustices that afflicted Chinese immigrants in America of the 1880s — King must have Charlie as a business partner because of race-conscious laws restricting property ownership — and depicts, even-handedly, the bitterness of the white miners toward Chinese laborers, who are willing to work for lower wages. But the film is less interested in creating heroes and villains than it is in re-creating a specific time and place, and revealing full-bodied, sometimes contradictory characters. Even the rapacious Hong King, played with sly and robust charm by Michael Paul Chan, is allowed some redeeming qualities, while Charlie occasionally seems self-pitying and weak.

One particularly nice touch: Polly strikes up an easy friendship with Berthe (Beth Broderick), a hearty German-born prostitute who teaches Polly how to bake an apple pie. Two women from different, distant parts of the world, each recognizing the other’s essential humanity as they settle — awkwardly, reluctantly — into a new home. That, too, is part of the uncommonly interesting American history lesson offered in this uncommonly good American independent movie.

Your review has intrigued me. I must see this movie!

Thanks for sharing this information with us.