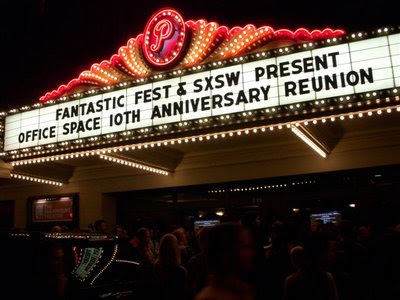 Gazing at the capacity crowd that turned out Sunday evening for a special 10th-anniversary screening of Office Space at Austin’s Paramount Theatre, writer-director Mike Judge couldn’t help noting: “I think there are more people here tonight than went to see the movie during its opening weekend ten years ago.”


Maybe so. The movie was considered a box-office under-achiever back in 1999 – which, at the time, was no small embarrassment for me. Don’t get me wrong: I’m sure Judge and his amazing ensemble cast were pretty bummed out by the bad news, too. But, hey, I was the one who had boldly predicted in my original Variety review that Judge’s sharply satirical comedy about cubicle-bound wage slaves would be nothing less an instant cult-fave phenomenon, one that would inspire “a new trend: Friday happy-hour get-togethers topped off with visits to multiplexes for repeat viewings of Office Space.”

Actually, it took quite a bit longer than a single opening weekend for Office Space to gain the recognition and attract the avid following it so richly deserves. But as I noted while shamelessly pestering Judge at a pre-screening reception: I wasn’t so far off the mark, was I?

“Actually,” Judge replied, “I’ve heard that Office Space is the movie most often requested for office parties at the Alamo Draft House here in Austin. The employees get to pick whatever movie they want. And I guess there’s a certain amount of tension when their bosses see the film, but that’s what they want.

“So I guess,” he added, looking at me with a wink-wink, nudge-nudge grin, “that makes you the Nostradamus of film critics.”

I’m sure he was just being polite – but, hey, I take my strokes where I can find them.

Meanwhile, back at the Paramount: Several members of the original Office Space cast joined Judge on stage to take questions from the wildly enthusiastic audience. One sharp-eyed fan – someone who’d clearly seen the movie several times before – asked John McGinley, the Scrubs star who plays efficiency expert Bob Slydell, why the actor wore his wristwatch “not like most people do” in the movie. McGinley, clearly amused by the query, responded earnestly: “I wore my watch facing toward my body because my father was a paratrooper. And they wear their watches like that, so they won’t reflect ambient light during their decent. So I wore my watch that way as a kind of tribute to him.” No kidding.

Ron Livingston, the top-billed star of Office Space, couldn’t make it to the 10th-anniversary screening. (Neither could Livingston’s leading lady, some obscure actress last seen appearing topless on the cover of a men’s magazine.) But Judge made a special point of explaining why he cast Livingston as Peter Gibbons, a young computer programmer stuck in a stifling and spirit-killing job at an Austin-based company: “A lot of people who read for the part read it like someone who thought they deserved better. Ron read it like someone who really didn’t think he deserved better – and it bummed him out even more.”

Gary Cole received full-throated cheers from the Paramount audience as an exuberant tribute to his iconic performance as the smarmy and self-absorbed Bill Lumbergh -- a.k.a., The Boss from Hell. McGinley admitted that he, too, had auditioned for the part. But he learned of Judge’s final choice, he had no complaints. “When I got out of NYU in ’84,” McGinley recalled, “the Steppenwolf Theatre Company had just arrived from Chicago, and was turning New York upside down. And it was during this time that I saw Gary Cole do things on stage that just blew me away. So when I found out that he was the one they cast as Lumbergh, and I was going to be cast as Bob, I thought, ‘Well, yeah. Jesus got the role of Lumbergh. That’s OK. I’ll fuckin’ play the part of Bob.’” Smart move.
Posted by Joe Leydon at 2/09/2009 07:40:00 PM

Really great write up of this event! We should team up. :) I posted a few of my photos from this event on my blog if you are curious
http://marysledd.com/2009/02/event-office-space-reunion/