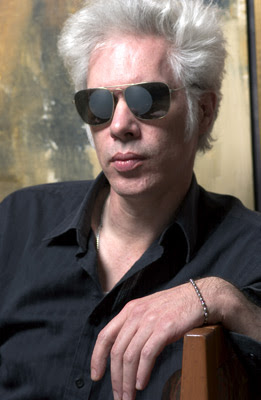 Back in late 1989, when I interviewed Jim Jarmusch in his favorite neighborhood bar, the already-iconic indie filmmaker was a witty and gracious conversationalist -- but instinctively guarded when asked to interpret his movies: "[H]e might describe Down By Law as 'a children's story for adults,' or briefly describe the symbolism behind the title Mystery Train: 'It's three stories, as though they are three separate cars on a train that are all taking the same journey . . . And yet, if you're on a train with other people, and they're in another car, you've made the same journey, and yet you don't meet them, and your experience is completely different.' Even as he speaks, however, Jarmusch looks and sounds like a man who's slightly embarrassed, who fears he's made a pompous speech when he should instead let his pictures do the talking."

Judging from his more recent interviews in the New York Times and the Los Angeles Times, Jarmusch still doesn't want to give too much away about his motives and meanings. Which, of course, makes me all the more eager to see his latest film.
Posted by Joe Leydon at 4/26/2009 06:48:00 PM

Email ThisBlogThis!Share to TwitterShare to FacebookShare to Pinterest
Labels: Down By Law, Jim Jarmusch, Mystery Train, The Limits of Control