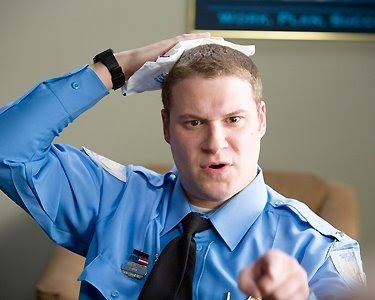 “With most of the characters I’ve played,” Seth Rogen told me a few days ago, “I think people think, ‘Hey, I’d like to hang out with that guy.’ But this isn't one of those characters."

Damn right. Rogen was talking about his role as Ronnie Barnhardt, a borderline-psycho who occasionally crosses the line, in Observe and Report, the audacious black comedy I reviewed a few weeks ago at SXSW. A mood-swinging, quick-tempered shopping mall security guard with a ridiculously exaggerated (and altogether unjustified) sense of self-worth, Ronnie is a terse, tough-talking martinet who still lives at home with his booze-addled mom (Celia Weston), nurses a crush on a slatternly salesclerk (Anna Faris) and commands the other guards on his watch – including two clueless but loyal Asian siblings, memorably played by twin brothers John and Matthew Yuan -- with the tightly-focused intensity of a Marine sergeant in a war zone. Scary stuff, kids. But funny stuff, too.
As I write in the intro to a Rogen Q&A that appears in Friday's Houston Chronicle: "Observe and Report allows Rogen ample opportunity to behave in ways likely to shock many moviegoers who were engaged by his talent to amuse in such movies as Pineapple Express and Superbad (both of which he co-scripted with writing partner Evan Goldberg). [And, of course, Knocked Up.] Mind you, the new movie really is, at heart, a comedy. But as Steve Martin famously noted in an entirely different context: Comedy is not pretty."

A few outtakes from that interview:

Q: Are you little surprised by the reaction you've received so far at SXSW and other places where Observe and Report has been screened?

A: Yes, because, honestly, I was open to no one getting it at all. Like, I wasn’t sure it would get laughs, I wasn’t sure people would think it’s funny. And beyond that, I wasn’t really sure people would really get what we were going for. But some people could not get it more. And that’s great, because I honestly did not expect it. Obviously, we’ll see what audiences think when the movie comes out. But the fact is, I’ve seen it in theaters full of people, and it gets tons of laughs. And critics actually seem to get what we were going for to a degree that I would have never expected in a million years. It’s already far more accepted than I thought it would ever be.

Q: Some actors base their performances on people they’ve known. Do you know anyone at all like Ronnie Barnhardt?
A: Not at all. Honestly, I really approach acting from a writing perspective. I sometimes am the writer. And when I’m not, I will read the script as though I was the writer, and I just think, well, if I wrote this, what would I want the actor playing that role to do in order to bring what I wrote to life? And that’s really how I approach it.
Q: Ronnie does some pretty freakin' reprehensible things during Observe and Report. Were you yourself appalled by anything he did?
A: Well, I would actually feel guilty at times about my behavior toward the Yuan twins in the movie. After takes, I would tell them, “Look, I’m so sorry, guys. I don’t want to do this, but…”

Q: There’s at least one advantage that actors of previous generations had over you – they never had to read nasty comments about themselves on the Internet. Like, Clark Gable would never go on line, and read that someone on some website posted a snarky remark about his big ears. You’re not quite so lucky. Do you ever get upset by anything you read about yourself on the web?
A: Not really. Because I know for a fact that nothing that is said on the Internet has any effect on real life in any way, shape or form. And if it did, then Transformers would have been the biggest flop of that year. I just know for a fact that those people have no effect on anything. It’s completely irrelevant. So I don’t give a shit what they say. They’re literally just people who know how to use a computer slightly better than other people. And that’s it. They’re nerds.

Q: Speaking of high-tech stuff: Thanks to digital recording and other innovations, everything you do in movies and TV -- everything -- likely will be around forever. That, too, isn't something that actors and filmmakers didn't think much about back in the 1930s and '40s.

A: Yeah, the idea that movies are around forever – that is something we do think about, and are very aware of. And it does add a lot of pressure on us. I mean, most of the movies we watched when we were kids were not movies that were made around then. Like, I would watch videos of Woody Allen movies that were made 20, 30 years earlier. So, yeah, we want to make movies that’ll still be good 20, 30 years from now. And we kind of go out of our way to not make them too timely in their content. We want to feel current – we want people watching them to be able to relate to them now – but we don’t want to be about, like, the fuckin’ Octomom or something like that.

Q: But there are specific pop culture references in your movies, right?

A: We do like to make references to other movies in our movies, sure. But we try to be aware of the fact that, like, people might be watching this in 20 years, and we want it to be funny then, too. We don’t want them to just not get what the fuck we’re talking about. It’s like, in Superbad, Jonah makes a reference, like, “I’d like the Coen Brothers to direct my porn.” That was a very conscious choice, the Coen Brothers, because we figure, in 20 years, people will still know who the Coen Brothers are. And we should use a director who’s timeless. But that’s all the effort we put into it, really. Just so that, when you’re watching it in the future, it’s not weird. Like, in Observe and Report, there are no cell phones in the movie. Because those really date movies a lot. Like, you watch a movie from the ‘90s and somebody pulls out a cell phone – it just looks ridiculous all of a sudden. Our movies don’t usually have a lot of emphasis on the technology or anything like that. We do try to make them so that something doesn’t occur that just totally takes you out of it if you’re watching it a few years later.

Q: Of course, I have to admit that when I reviewed Knocked Up at SXSW a few years ago -- months before it hit theaters -- I enjoyed all the references to Spider-Man 3. Because I knew, just knew, that when people finally had a chance to see your movie at the megaplex, Spider-Man 3 might be playing in the auditorium next door.

Q: Speaking of Knocked Up -- thanks for making the jokey reference to me on the DVD commentary track for that film. It gave me a whole lot of new cred with my film students at University of Houston and Houston Community College.

A: Yeah? Well, I'm about to record the commentary for Observe and Report.

Q: Well, please go ahead and jab me again.