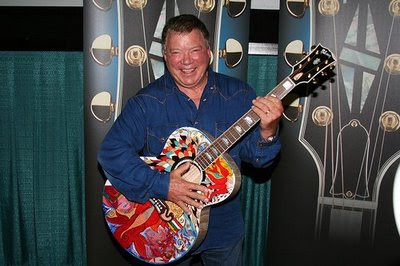 To the surprise of absolutely no one -- including, judging by his expression when he received the query, William Shatner himself -- the very first question directed at the actor last week during a post-screening Q&A following the Nashville Film Festival's world premiere of William Shatner's Gonzo Ballet had to do with.... Star Trek. Specifically: "What do you think of the new Star Trek movie?"
Boldly going where he's gone many, many times before, Shatner seriocomically replied: "I haven’t seen it. And I’m appalled that I’m not in it. I’ve had a fun time with the director, J.J. Abrams, cussing him out on the websites and in interviews. But we’re buddies. And I called him three or four weeks ago and told him about this charity horse show that I’m putting on in Los Angeles – the Priceline.com Hollywood Charity Horse Show. Hey, they’re the big sponsors, so we’ve got to get their name out there. And so I invited J.J. And he said, ‘Oh, I’ll take a whole table.’ And I said, ‘Great. But, you know, you should bring the cast, because there’ll be a lot of press there…’ And he said, ‘I’ll take two tables.’ So J.J. Abrams and the cast of the new Star Trek movie are coming, and we’ll make a big to-do.
"But deep down," Shatner added, struggling manfully to maintain his straight face, "I’m still appalled."

And now -- as Paul Harvey might have said -- here's the rest of the story: To honor Shatner on the occasion of Gonzo Ballet -- a surprisingly affecting account of his collaboration with Ben Folds on Shatner's Has Been CD, which inspired a ballet choreographed by Margo Sappington -- the Nashville Festival muckety-mucks commissioned Gibson Guitar Corp. to construct, and artist Mandy Lawson to paint, a customized acoustic guitar to give the veteran actor as a special "Impact Award". The prize certainly made an impact on Shatner when he received the one-of-a-kind instrument from Gibson CEO Henry Juszkiewicz. "When I was a young stage actor out on tour," Shatner recalled, "I used to bring along a printout with me, to try to learn the fingering so I could play the guitar. But I never mastered it. And even later on, I never had the time -- never took the time -- to learn how to play. But let me tell you -- now I make the time."

Shatner looked so unabashedly pleased with his prize that I couldn't resist offering him a fist bump and two words of encouragement: "Rock on!" He exuberantly bumped back, smiled brightly and replied: "Yeah, I'll rock on."