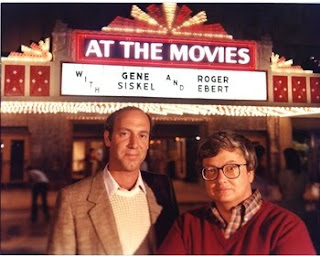 Even though I haven't watched the show much in recent years -- well, OK, except  for the few times I appeared as a guest in 2008, during the short-lived heyday of Ben Lyons and Ben Mankiewicz --  I could not help but wince a bit when I heard yesterday that, at long last, the ax had fallen on At the Movies, the weekly movie review program Roger Ebert and the late Gene Siskel began in 1986 (following in the tradition of their two earlier, similar series). It's always painful when a revered tradition comes to an end, even if that ending occurs long after much of the original reverence has dissipated. (Not that Roger or Gene had anything to do with that.). Still, as even Roger admits, the cancellation was inevitable:

At the Movies was one of the last survivors of half-hour syndication. It didn't fail so much as have its format shot out from beneath it. Don't blame Disney. Don't blame Tony Scott and Michael Phillips, the final co-hosts, critics I admire who still have five months left on the air. Don't blame Ben Mankiewicz. Don't blame my pal Richard Roeper, who didn't fancy following the show in a "new direction." Don't blame the cancer that forced me off the show. Don't even blame Ben Lyons. He was the victim of a mistaken hiring decision.

Blame the fact that five-day-a-week syndicated shows like Wheel of Fortune went to six days. Blame the fact that cable TV and the internet have fragmented the audience so much that stations are losing market share no matter what they do. Blame the economy, because many stations would rather sell a crappy half-hour infomercial than program a show they respect. Blame the fact that everything seems to be going to hell in a hand basket.

But don't despair: Rogert promises to soon launch yet another movie review program, one that "will go full-tilt New Media: Television, net streaming, cell phone apps, Facebook, Twitter, iPad, the whole enchilada. The disintegration of the old model creates an opening for us. I'm more excited than I would be if we were trying to do the same old same old." Good luck. We'll see you at the movies. But we won't forget the old show.

Email ThisBlogThis!Share to TwitterShare to FacebookShare to Pinterest
Labels: "At the Movies", Gene Siskel, Roger Ebert