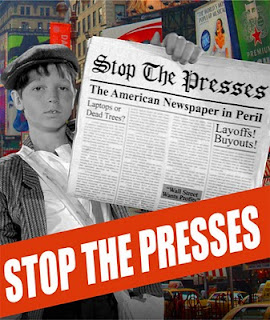 Just three weeks before the 15th anniversary of the closing of The Houston Post – yeah, I know, I didn’t think it had been that long, either – here comes a film that confirms our worst suspicions: Things have only gotten worse for the newspaper industry since the Post was toasted. Stop the Presses, a critically acclaimed documentary co-directed by Mark Birnbaum and Manny Mendoza, will have its H-Town premiere Saturday, March 27, in the Performing Arts Center at the Spring Branch campus of Houston Community College, 1010 West Sam Houston Parkway North.

The 8 p.m. screening will be preceded by a 7 p.m. reception – complete with free soft drinks, popcorn and balloons for the kiddies (OK, I made up the part about the balloons) -- for visiting filmmakers Birnbaum and Mendoza, who’ll hang around for a post-screening panel discussion with such luminaries as Kyrie O'Connor and Bob LeVitus of The Houston Chronicle and… and.. well, and me. (But don’t let that keep you away.)

Be forewarned: Stop the Presses is not a pretty picture. “The American newspaper’s vital role as public watchdog is in danger,” co-director Mendoza insists. “Circulation and revenue have plunged as readers and advertisers flee to the Internet, thousands of journalists have been laid off or bought out, and stockholders have forced top news organizations out of business.” Stop the Presses “takes viewers inside disheartened newsrooms to document the devastation,” Mendoza says, “and into the community to learn what readers think of journalism’s fate.” Among the on-screen interviewees: Ben Bradley, Dave Barry, Ed Asner (who isn’t really a newspaper editor, but played one on TV) and the late, great Walter Cronkite.

Stop the Presses – which will be presented in Houston by the Real Films series of The Documentary Alliance -- premiered at the AFI Dallas Film Festival in April 2008. Since then, The Rocky Mountain News in Denver shut down, and Seattle Post-Intelligencer switched over to an on-line only operation. The corporate parents of many other prestigious papers -- including the Chicago Tribune, the Los Angeles Times and The Denver Post — have sought bankruptcy protection, And earlier this week, the Associated Press reported that, according to figures released by the Newspaper Association of America, U.S. newspaper advertising revenue across the board last year plunged 27 percent to its lowest level since 1986.

“If we had known the situation was going to get this bad,” Mendoza says, “we might have gone with our original subtitle -- Death of the American Newspaper.” Yikes.