Another shameless attempt to attract blog traffic with cheesecake 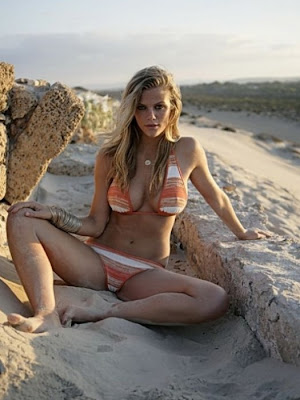 According to my Culture Map colleague Chris Baldwin, Brooklyn Decker -- Adam Sandler's sexy leading lady in the upcoming comedy Just Go With It -- has been spotted among the celebs converging on Dallas during the days leading up to the Super Bowl. Of course, considering what the weather is like in Big D right now, I seriously doubt she's been spotted wearing the same attire she does in the above photo. But, hey, that won't stop me from running the picture here. Because, as we all know, I have no shame. And neither, it appears, does Ms. Decker. (I kid, I kid!)

BTW: I didn't realize this until comparatively recently, but Just Go With It is a remake of Cactus Flower

by Abe Burrows -- that starred Walter Matthau as a womanizing dentist who pretends to be married to his spinsterish assistant (Ingrid Bergman) in order to avoid a commitment with his hot young girlfriend (Goldie Hawn, whose bubbly performance netted her an Oscar as Best Supporting Actress). Looks like Sandler will be playing the Matthau part, Decker takes over for Hawn -- and Jennifer Aniston plays the spinsterish assistant.

Hmmmm. I strongly suspect there was some serious rewriting, and more than a little reconceptualizing, while updating the original scenario.
Posted by Joe Leydon at 2/03/2011 04:34:00 PM

I see you've written something and I'm sure it's very thought-provoking, but I'm little distracted at the moment to actually read it. I really enjoy your blog!

Look at the feet!

Great tips and very easy to understand. This will definitely be very useful for me when I get a chance to start my blog. responsive wordpress theme