Why did Dogs die?

Hollywood Elsewhere blogger Jeff Wells asks: Why did Rod Lurie's remake of Straw Dogs tank at the North American box-office this weekend? Well, as I have noted elsewhere: Maybe the title meant absolutely nothing to its presumptive target audience of young male moviegoers.

Yes, I know, we're talking about an updated version of a Sam Peckinpah classic. But based on my admittedly unscientific research -- i.e., asking students in my film studies classes at University of Houston and Houston Community College -- I would argue that it's not unreasonable to suspect most people under the age of 30 have never heard of that 1971 film, much less watched it. And, perhaps more important, there's the title itself: What the hell does it mean? Seriously. I'm old enough to remember that, as early as the original film’s second week of release, the distributor felt compelled to buy newspaper ads and print lobby posters that actually featured a ceremonial straw dog set ablaze, to kinda-sorta explain the symbolic meaning of the title. Obviously, that helped. Just as obviously, though, it was a necessary marketing move. 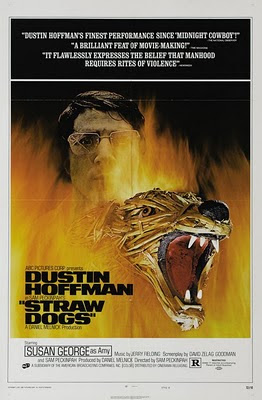 I haven't seen Lurie's Straw Dogs yet, and for all I know, it's every bit as terrific as my friend Roger Ebert says. But as far as doing a post-mortem on its failure to find an opening weekend audience? With all due respect, James Marsden, Kate Bosworth and Alexander Skarsgard have yet to prove themselves as consistent box-office draws. And then, of course, there's the title. Maybe Lurie would have done better to use the title of the book -- The Siege of Trencher's Farm -- that inspired Peckinpah's original film in the first place?
Posted by Joe Leydon at 9/18/2011 05:39:00 PM

As someone who is probably about the same age as most of your students, I will confess that I've never seen Straw Dogs.

And all I've ever heard of it is very violent and has lots of blood splattering, which is not much of a selling point with me.

So yeah, I have little or no desire to see a sequel.