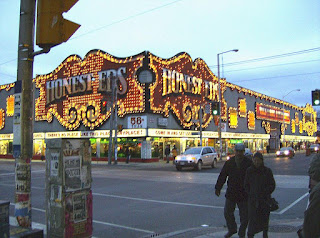 How many times have you seen this place in movies, commercials and TV dramas? Probably a lot more than you'd think. It's Honest Ed's, a massive discount store that takes up an entire block on the corner of Bloor and Bathurst in Toronto. And the gaudily lit storefront has proven irresistible for scores of directors and location scouts who have shot on location in Toronto over the decades. I never fail to smile when I see it in a film or television production -- particularly when that film or television production supposedly is set somewhere else (New York, Chicago, anywhere) and Honest Ed's is the dead giveaway that, well, somebody thought shooting in Toronto would be much cheaper. Or easier. (After all, eh, we're talking about one of North America's film production hubs.) Or both.

And when it pops up in a movie that is set in Toronto -- well, as I joked with filmmaker Edgar Wright after he directed Scott Pilgrim vs. The World

, his prominent placement in his film of Honest Ed's (which, not incidentally, also looms large in the graphic novel on which Scott Pilgrim was based) must have been his way of telling the world that, yeah, this really is Toronto playing Toronto for a change.

But I must confess: The chief reason I enjoy seeing Honest Ed's is a sentimental one: It's very near the home of dear friends I look forward to visiting every year  that I cover the Toronto Film Festival. I'll be seeing Honest Ed's again -- up close, in real life -- in less than 48 hours. I can't wait.
Posted by Joe Leydon at 9/05/2011 10:28:00 PM

Joe ... Having lived in Toronto for 12 years I became a real fan of Honest Ed's store ... an excursion there always yielded something .. useful or not! One time in the 1960's they has a sale of original movie posters ... why I don't really know ... but there they were. I took an opportunity to buy a birthday gift for a friend ... an original of Marlon Brando's THE WILD ONE ... I paid about $25 for it ... Oh! The Horror! Friendship be damned (she ultimately turned out to be a jerk) .. I just wish I had my poster back .. current value is approximately $1500!! I am sure that she probably dumped it.

Please check to see if they still have available (FOR ME) at Honest Ed's ...

another fan of Honest Ed's! we just released a music video filmed entirely in and around the store. it was really fun, and especially interesting to see the 'behind the scenes' signpainting shop, warehouse and employee areas...feeling pretty lucky!