Take 59: Confessions of a Nazi Spy 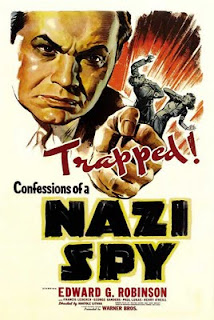 One of the first mainstream, major-studio American movies to explicitly warn against the menace posed by fascism both aboard and at home, Confessions of a Nazi Spy

(1939) also is one of the relatively few Hollywood productions of any sort ever to be disdainfully criticized – and robustly defended – on the floor of the US Senate.

It’s a corking good ripped-from-the-headlines melodrama, brisk and brash in the unmistakable style that defined Warner Bros. films of its period. And like many of those other Warners films, this one basically is a rousingly entertaining crime story about a blunt-spoken, hard-charging lawman bent on taking down wily outlaws backed by thuggish henchmen and cretinous confederates.

and other Warners gangster flicks. And the bad guys are Nazi spies, Gestapo goons, and subversive spokesmen for the German-American Bund.

Dr. Karl Kassel (Paul Lukas), a German immigrant, seems thoroughly assimilated -- he’s even a Navy reserve officer! – and red-white-and-bluish. But no: He’s really a fervent National Socialist who’s doing his bit to make the whole world go to heil by delivering fiery speeches at Bund rallies, exhorting his fellow German transplants (and gullible native-born citizens) in New York and elsewhere to support Adolf Hitler and join the Fatherland’s campaign to “save America from the chaos that breeds democracy and racial equality.”

On rare occasions, Kassel must employ uniformed “German patriots” to subdue dissenters in his audience. (Ward Bond – who, just three year later, would play an ex-con seeking to claim a bounty on Der Fuhrer in the exuberantly daft B-movie Hitler – Dead or Alive -- has a memorable cameo as war vet who’s shouted down, and beaten up, when he rails against Nazism: “We don’t want any –isms in this country except Americanism!”) Much more often, however, Kassel’s words resound well with useful fools such as Kurt Schneider (Francis Lederer), a malcontent who’s so certain that he’s destined for greatness that he never bothers to hold down a steady job – we learn that, years earlier, he spent prison time for being a military deserter – and is all too willing to perform, for a price, services that might gain him the place he richly deserves in the inner circle of the Master Race.

Fairly early on, it’s obvious that Schneider isn’t the sharpest knife in the schnitzel store: He actually tries to make contact with Nazi spylords by writing an application letter to a German newspaper. Amazingly enough, however, this is not viewed as a bad career by a potential employer, a haughty Kraut who comments: “The Americans are a very simple-minded people. One doesn’t need a wolf where a weasel will do.” And so German intelligence chief Franz Schlager (George Sanders, sporting a whitewall haircut and a Teutonic screw-you sneer) sails to America to offer Schneider sliding-scale payments for any info on military armaments and troop stationing.

It doesn’t take long for Schneider to screw up conspicuously enough to eventually alert G-man Renard, an eagle-eyed patriot who’s long suspected the existence of a Nazi spy network in the good ol’ US of A. Openly scornful of the delusional dim bulb in his sights, Renard berates Schneider in a contemptuous harangue. How contemptuous? Well, try to imagine Edwin G. Robinson barking these lines: “He’s been listening to speeches and reading pamphlets about Nazi Germany, and believing them. Unfortunately, there are hundreds like him in America – hysterical, half-witted crackpots who go Hitler-happy from overindulgence in propaganda that makes them believe that they’re supermen.”

Renard plays Schneider like a violin, deftly appealing to the preening loser’s vanity while getting him to give names, more names, and names of people who haven’t even been born yet. (OK, I’m making up that last part – but it’s not much of an exaggeration.) After that, it’s just a matter of connecting the dots to make small-timers rat on big cheeses, all without the messy necessity of enhanced interrogation techniques. (One character takes pains to emphasize: “Don’t worry, there’s not a third degree with the Federal Bureau of Investigation.”) The lucky spies wind up in a New York courtroom before a gravely outraged judge. The unlucky ones are transported, unwillingly, back to the Fatherland to face displeased Nazi overlords.

Cue the uplifting speeches and dire warnings, passionately delivered before the final credits roll as “America the Beautiful” swells on the soundtrack. (No, I’m not making up that.)

Part of what makes all of this so fascinating – and occasionally, as I discovered while watching the film for my Take 59 project, absolutely gobsmacking – is the fact that, back in 1939, when Confessions of a Nazi Spy was produced and released, the US had an official policy of neutrality toward Germany and, perhaps more important, the US film industry’s censoriously conservative Production Code Administration routinely neutered or entirely removed anything that smacked of negative criticism of foreign governments in American movies.

, PCA chief Joseph Breen was one of many fervent non-interventionists among film-industry higher-ups who didn’t want anything appearing in Hollywood movies that might upset foreign leaders – and lead to the banning of all Hollywood releases in countries controlled by those leaders -- or give American ticketbuyers (and Washington politicians) the idea that studio chiefs were pushing for active American involvement in what appeared to be an inevitable war in Europe. As a 1938 PCA internal memo fretted: “Are we ready to depart from the pleasant and profitable course of entertainment, to engage in propaganda?”

That the events depicted in Confessions of a Nazi Spy were based on real-life events – Nazi spies actually were caught and tried in New York in 1938, thanks in part to the efforts of a G-man not unlike the one played by Robinson – didn’t entirely mollify Breen. (Nor did the factual basis for the scenario deter the German consul in Los Angeles from warning Breen that production of Confessions might lead to “difficulties.”)

But the unabashedly anti-fascist mogul Jack Warner forged ahead anyway, defying all suggestions to soft-pedal what he and his filmmakers saw as Nazi Germany’s threat to the American way of life. Unlike, say, Idiot’s Delight, the 1936 Broadway hit that had to be transported from the Italian Alps to an unnamed European Country, and scrubbed of any unpleasant remarks about Benito Mussolini, before a movie adaptation could be released, Confessions switched back and forth between a New York infiltrated by Nazi spies and Bund propagandists, and a Germany where swastika-emblazoned bad guys hail Hitler – whose image appears in prominently displayed photos and portraits -- and plot deviltry.

Confessions of a Nazi Spy wound up being a box-office hit. But that wasn’t enough to mollify various non-interventionist firebrands in Washington, D.C. Gerald P. Nye, an isolationist Republican senator from North Dakota, loomed large among those who called in 1941 for a specially empanelled subcommittee of the Committee on Interstate Commerce to investigate “war propaganda disseminated by the motion picture industry” -- specifically, movies such as Charlie Chaplin’s The Great Dictator

(in which Walter Pidgeon plays a big-game hunter who considers taking a shot at Hitler) and, yes, Confessions of a Nazi Spy.

It’s worth noting that Harry M. Warner, present of Warner Bros., appeared before the subcommittee and, in a prepared statement, defended Confessions of a Nazi Spy: “I cannot conceive how any patriotic citizen could object to a picture accurately recording a danger already existing in our country… Civic, patriotic and labor organizations endorsed this picture. Hundreds of thousands of movie patrons paid to see it.”

It’s also worth noting that the subcommittee hearings on “interventionist propaganda” were adjourned on Sept. 16, 1941. On Dec. 8, they were permanently abandoned.