Double your pleasure with Sarah Palin 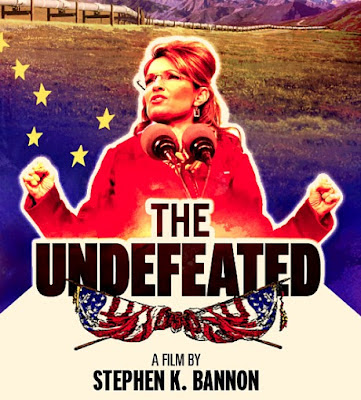 Looks like ReelzChannel -- the cable network that picked up the controversial (and, ultimately, award-winning) miniseries The Kennedys -- is wading into the political maelstrom again. One day after HBO's March 10 premiere of Game Change -- Jay Roach's filmization of John Heilemann and Mark Halperin's best-selling and eye-opening account of the 2008 Presidential race, starring Julianne Moore as Sarah Palin -- Reelz will air Undefeated, Steve Bannon's hagiographic portrait of the half-term Alaskan governor and 2008 GOP vice-presidential candidate. Funnily enough, both productions will air after Super Tuesday, at a time when Republicans may be looking for a brand new Presidential prospect....

Or as I noted in my Variety review last year, Undefeated "leaves open the question of whether [Sarah Palin] will run for president in 2012. But it persuasively argues that, in any event, she'll continue to be an influential and galvanizing force as a leader of the Tea Party movement. Don't be surprised if you actually do see excerpts from this [documentary] at some political convention in the not-so-distant future."