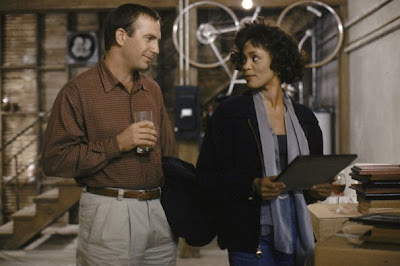 Something to think about, perhaps, as we contemplate Whitney Houston's many achievements: Did she and Kevin Costner share what future film historians will describe as the first post-racial on-screen romance? Back when I reviewed The Bodyguard in 1992, I noted: "[T]he moviemakers are refreshingly casual about the racial element in the relationship between Farmer [Costner's character] and Marron [Houston's character]. In fact, nobody in the entire movie ever mentions race." Trust me: Such nonchalance was not so common back in the day.
Posted by Joe Leydon at 2/12/2012 12:18:00 AM

You are so right, Joe. I remember sitting in the theater watching that film and being very pleasantly surprised that race was NOT a plot point.

I remember thinking at the time that their shared charisma in these roles superseded any thoughts about race.