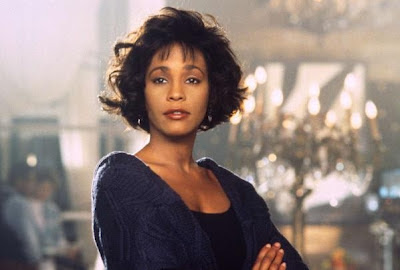 After so many years of hearing so many stories about Whitney Houston's battles with substance abuse and personal demons, the news of her death Saturday night at the ridiculously young age of 48 seems, alas, like the inevitable climax of an all-too-familiar story. Indeed, as publicist Howard Bragman told CNN shortly after the story broke: The death announcement was a shock -- but not a surprise.

What a shame. What a loss. But I prefer not to mourn deaths when I can celebrate lives. In The Bodyguard, The Preacher's Wife and Waiting to Exhale, Whitney Houston was an exceptionally charismatic screen presence -- so much so, in fact, that I've been looking forward to her movie comeback this summer in Sparkle. I have very fond memories of enjoying her steady stream of chart-topping hits back in the '80s, especially during that stretch when it seemed like every other video on MTV and VH1 was hers.

And, hey, I don't know about you, but I've always thought -- no, dammit, I've always known -- that Houston's Rachel Marron and Kevin Costner's Frank Farmer eventually got back together for happily-ever-aftering after Farmer got out of the bodyguarding racket.

So please join me as I remember Whitney Houston's scintillating exuberance, not her decline and fall. My condolences to her friends and family. And my thanks for these and other great performances: