Remembering James Gandolfini in The Mexican 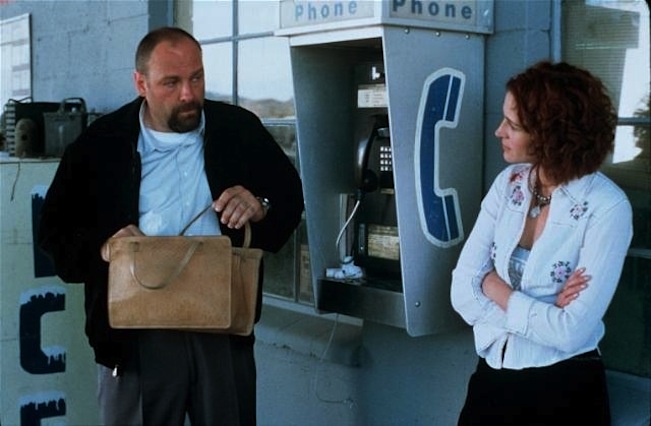 The passing of time and lives often can change attitudes about certain films and the performances they showcase. In the wake of James Gandolfini's recent death, some critics and bloggers have written eloquently and/or appreciatively about the Sopranos star's scene-stealing supporting turn as a brutally efficient but unexpectedly sensitive hit man in The Mexican, Gore Verbinski's 2001 dark comedy top-lining Brad Pitt and Julia Roberts. And yet, even now, the movie itself continues to be widely regarded as something of a misfire, a rattletrap star vehicle built for two that offered too few laughs.

So I feel compelled to once again file a minority report: The Mexican, as I noted in my original 2001 review, is "an arrestingly offbeat shaggy-dog story that somehow remains fleet, fresh and funny even during its most dizzying mood swings between droll whimsy and sudden violence... Working from a witty and free-wheeling screenplay by J.H. Wyman, director Gore Verbinski... does a fine job of fusing the movie’s disparate elements – everything from frenetic slapstick to affecting tragedy, from blazing gunplay to sepia-toned, silent-movie flashbacks – into a consistently engaging and uniquely satisfying whole."

And yes: It's more fun than Verbinski's upcoming The Lone Ranger (despite the latter's own homage to silent-movie comedy conventions).

For the benefit of those who tuned in late: Pitt plays Jeff, a low-level courier for L.A. mobsters who is sent south of the border to retrieve an invaluable (and possibly cursed) antique pistol known as -- yes, you guessed it! -- The Mexican. His mission delays the long-planned Las Vegas holiday he intended to enjoy with Samantha (Roberts), his live-in girlfriend, who's so infuriated that she sets out for Nevada by herself. Along the way, however, she makes the acquaintance of Leroy (Gandolfini), who forces himself upon her as a traveling companion.


Leroy says he plans to hold [Samantha] as a hostage, just in case Jeff gets any funny ideas about delivering The Mexican to the L.A. mobsters. Samantha is incredulous – she doubts Jeff would ever have any ideas, funny or otherwise – but, like her errant boyfriend, she’s in no position to argue.

One thing leads to another, on parallel tracks, on either side of the border.  In Mexico, Jeff bumbles his way from one sticky situation to the next, evidencing survival skills that give a whole new meaning to the term “dumb luck.” (Another character marvels: “By the grace of God, you have managed to Forrest Gump your way through things!”) In Las Vegas, Leroy is an unexpectedly sympathetic listener while Samantha prattles endlessly about her rocky relationship with Jeff.  Indeed, the funniest scenes in The Mexican illustrate that, deep down, Leroy is a deeply sensitive fellow with his own set of relationship “issues.” When he isn’t shooting people, or handcuffing hostages to hotel-room beds, he’s a real sweetheart.

Gandolfini is splendidly funny as Leory, a sad-eyed lug who just happens to be ruthlessly lethal in his unforgiving professionalism. He’s sneaky and subtle in his scene stealing, but at his very best during an interlude in a roadside diner where he and Roberts give and take as equals. Pay close attention, by the way, and you’ll catch his wink-wink, nudge-nudge allusion to the anxiety-ridden mobster he portrays in HBO’s The Sopranos.

I have Jeff Wells, of all people, to thank for making me aware of this charming YouTube clip. Enjoy.