Lysistrata Jones is ready to Give It Up! for her close-up 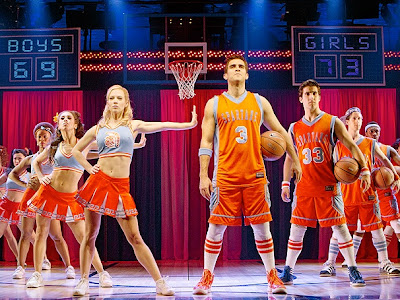 Back in 2010, I reviewed for Variety the Dallas Theater Center world premiere of a richly amusing musical comedy based loosely -- very, very loosely -- on Aristophanes’ Lysistrata, the 2,000-year-old Greek play about women who boldly wage a peace campaign by withholding sex from their warrior husbands. (Western fans take note: The play previously inspired The Second Greatest Sex, a 1955 movie musical starring George Nader and, no joke, Mamie Van Doren.) The show -- then aptly titled Give It Up! -- struck me as a spirited delight, one that I described in my review as a "funny, frothy mix of pep, pop and wink-wink naughtiness." I also noted that it "could eventually make the move to Broadway and possibly a subsequent big-screen reiteration."

As it turned out, the show, subsequently re-titled Lysistrata Jones, eventually did make it to Broadway -- and even earned what's known in the trade as a "money review" from The New York Times. (The above photo, featuring Patti Murin -- a veteran of the original DTC premiere -- Josh Segarra and other cast members, is from the New York production.) Unfortunately, it lasted only for 34 previews and 30 regular performances on the Great White Way. (Even so, an original cast album -- featuring a contribution from Jennifer Holliday -- was recorded and released.) But never mind: According to my Variety colleague Justin Kroll, it looks like the second part of my prediction also is coming true, thanks to Houston-born filmmaker Andy Fickman.

Gosh, I haven't been that good at prognosticating since I predicted great things (eventually) for Office Space.