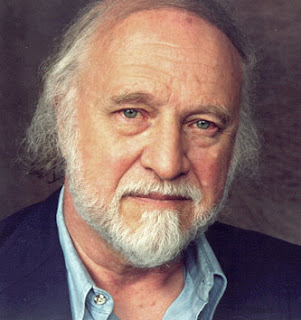 It feels like I’ve been seeing movies scripted by – and/or adapted from books or stories written by – Richard Matheson all my life. Maybe because, well, I have. But that isn’t the only reason I find it difficult to imagine a world without him. While I would like to offer my sincere condolences to his family and friends, I strongly suspect that his death this week at age 87 will do little or nothing to end the ongoing flood of films and TV dramas that others adapt from his works.

The Incredible Shrinking Man (script and novel) and his oft-filmed novel I Am Legend arguably are his best-known works, followed by his classic teleplays for The Twilight Zone (including “Nightmare at 20,000 Feet,” later recycled in Twilight Zone: The Movie) and Star Trek. But mention also must be made of his enduringly influential script for Steven Spielberg’s Duel, the lean and mean 1971 TV-movie (based on Matheson’s own story) that impacts you as simply and efficiently as a blunt instrument.

I’d also like to give shout-outs to his three Edgar Allen Poe adaptations for Roger Corman – one seriously spooky (The Pit and the Pendulum), another splendidly silly (The Raven -- somewhat deceptively sold in this trailer), the third a bit of both (Tales of Terror) – which I saw at an impressionable age, back when Castle of Frankenstein was my favorite magazine in the whole wide world. I continue to remember the movies, and the magazine, quite fondly. (In fact, I occasionally show the "Black Cat" segment from Tales of Terror to scriptwriting students as a good example of "loose" adaptation of literary source material.)

And while I can’t claim I’ve ever been a big fan, many incurable romantics still swear by the 1980 sci-fi/fantasy romance Somewhere in Time, the script for which Matheson adapted from his 1975 novel Bid Time Return. I’ll give the movie this much: Lead player Christopher Reeve was nowhere else ever more effective, or more affecting, as a non-super-powered protagonist.

Matheson also scripted an impressive 1973 TV version of Dracula – starring Jack Palance – with a slight but unmistakable touch of Sergio Leone to it. (In this version, Dracula periodically gazes at a portrait of a lost loved one in his chiming musical pocket watch – not unlike Lee Van Cleef in For a Few Dollars More.) Unfortunately, when it was set to premiere on Oct. 12, 1973, it had to be pre-empted (and later shifted to the following February) for then-President Richard Nixon’s introduction of Gerald Ford to replace the resigned-in-disgrace Spiro Agnew as Vice President.

Of course, this allowed me to joke for years afterward that I watched the telecast for a good ten minutes before realizing that Nixon wasn’t Dracula…
Posted by Joe Leydon at 6/24/2013 07:45:00 PM