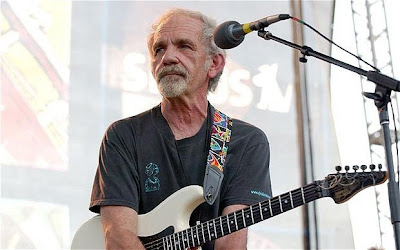 Can't say I fully appreciated the artistry of J.J. Cale -- the singer-songwriter who gave us "Cocaine" and "After Midnight" -- until I saw Jorg Bundschuh's fawning but fascinating To Tulsa and Back: On Tour With J.J. Cale at the 2006 Nashville Film Festival. As I noted in my Variety review:


Belying his standoffish reputation, Cale is surprisingly forthcoming — if a tad feisty — during discussions with Bundschuh between gigs. He seems mildly surprised that, after years of various excesses, he made it to 65. But he insists he’s not losing his edge. And he doesn’t want anyone to draw faulty conclusions from his relaxed singing style. “I’m not laid back,” he warns, only half-jokingly.

Well-shot performance sequences — including a duet with Clapton during the latter’s Crossroads Guitar Festival in Dallas — are satisfying showcases for Cale’s trademark fusion of blues, jazz and country. Pic is most amusing as Cale and long-time bandmates acknowledge the demands (including early morning radio interviews) of a concert tour. They pointedly note that the night after they performed for 60,000 at the Crossroads Festival, they appeared at a Houston club for an audience of 125. Even so, judging from the concert footage, they played for keeps at both venues.

You can order a DVD of the documentary here. And while you're waiting for it to arrive, you can savor Cale's 1979 Los Angeles session with Leon Russell (hat-tip to OpenSource.com) here.
.