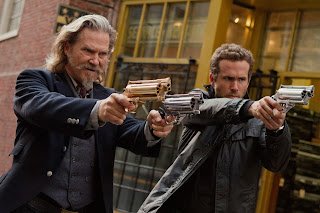 R.I.P.D. isn’t nearly as bad as its near-deafening advance buzz indicated – though, really, what movie could be? – but that doesn’t mean the laughs and gasps are satisfyingly abundant in this loud and clunky sci-fi fantasy action-comedy. As expensive and useless as something you’d buy in a duty-free store, it appears to be the work of filmmakers who saw Men in Black at an impressionable age, slapped themselves on their foreheads, and exclaimed: “Hey! We can do that!” Unfortunately, they can’t – though not for any lack of trying.

Based on a graphic novel – the same sort of source material that, not coincidentally, also inspired MiB – R.I.P.D. imagines a secret organization of undead law-enforcers charged with controlling (and, in extreme cases, destroying) human-disguised demons who are said to haunt the entire planet, but appear to congregate primarily in Boston.

Ryan Reynolds stars as Nick Walker, a Beantown police detective who shuffles off this mortal coil after being fatally shot by his corrupt partner during the chaos of a drug raid, and then gets a shot at redemption (or, failing that, rejuvenation) when he’s enlisted by an outfit known as the Rest In Peace Department (R.I.P.D.). He spends most of the movie behaving as someone intent on living down a terrible mistake -- like Green Lantern, perhaps? -- but his humorlessness is, strangely enough, more ingratiating than not.

Mary-Louise Parker is a deadpan delight as Proctor, the R.I.P.D. bureau chief who first recruits, and then commands, Walker. Indeed, her off-center line readings are funny even when the actual lines are not, and there’s something nicely, subtly wacky about the way her character’s coiffure and attire – along with the never-explained (or even acknowledged) presence of a vintage Fresca bottle on her desk – suggest that Proctor met her own demise sometime in the mid-1960s.

Roycephus Pulsifer – who’d really rather you call him Roy, and I’ll gladly comply – died even further back in time; specifically, the Wild West era, give or take a decade, when Roy rode tall as a sheriff before he, too, was waylaid by a treacherous partner and drafted into R.I.P.D. (A running gag – well, more like a plodding joke – involves Roy’s unpleasant memories of seeing his own corpse violated by hungry coyotes.) There’s nothing at all deadpan about Jeff Bridges’ portrayal of Roy. Hell, I would venture to say that his performance – basically a feature-length send-up of his Oscar-nominated turn as the cranky-swaggering Rooster Cogburn in True Grit -- could define whatever might be considered the polar opposite of deadpan. Still, much of this shtick is mildly amusing, especially when director Robert Schwentke (Red) and scriptwriters Phil Hay and Matt Mafredi put the silly plot on pause while Bridges’ cantankerous galoot and Parker’s monotone martinet define the contours of a drolly weird love-hate relationship.

The relationship that forms between Roy and Nick – who, naturally, are paired as partners – is rather less interesting, since the bonding comes off as less a parody of buddy-cop movie clichés than a rote rehashing of same. And while it seems modestly clever at first that they appear to onlookers as different entities while they roam among the living – Roy is a drop-dead beautiful woman (Marisa Miller), Nick is an elderly Asian gentleman (James Hong) – the joke remains, like too many other things in R.I.P.D., lazily under-developed.

Unfortunately for all parties involved, the sporadic flashes of oddball lunacy are increasingly overshadowed as the movie progresses by all the big-ticket sound and fury we’ve come to expect (if not dread) in a wanna-be summer blockbuster. The plot has something to do with a plan by demons to rebuild an ancient talisman that could literally unleash hell on earth, and something else to do with the threat posed to Nick’s widow (played – with a thick accent almost as mysterious as the aforementioned Fresca bottle – by Stephanie Szostak) by his former partner (played by Kevin Bacon in such way that a “surprising” plot twist isn’t surprising at all). But the scenario serves mainly as an excuse for a great deal of third-act CGI overkill – which is presented in 3D, by the way, but that doesn’t make it any less tediously repetitious.

Still, as I noted at the outset, R.I.P.D. is by no means a total disaster, and its minor pleasures are sufficiently pleasurable to make it bearable, if not laudable. Put it like this: When a publicist asked for my opinion as I walked out of a preview screening, she seemed pleasantly surprised when I replied, “Well, it didn’t suck.” Evidently, she was expecting something worse. Frankly, so was I.
Posted by Joe Leydon at 7/18/2013 11:49:00 PM