Godzilla: A brief history of The Original Gangsta Lizard 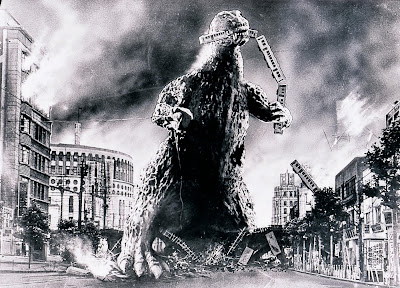 Much like Madonna, Matthew McConaughey and Miley Cyrus, Godzilla illustrates a time-honored showbiz dictum: The best way to sustain your superstardom is to repeatedly reinvent yourself.

During six decades of Japanese-produced low-tech monster mashes and made-in-America CGI-stuffed spectacles, Big G has remained au courant through the miracle of image makeovers. From nuclear-age nightmare to doting single parent, from freelance global defender to butt-kicking tag-team wrestler, he has evolved and developed, evincing a versatility that might make Meryl Streep turn green – or, perhaps more appropriately, charcoal gray – with envy.

In Godzilla, slated to open this weekend at theaters and drive-ins everywhere, The Original Gangsta Lizard has a bit less spring to his step, and a tad more spread to his waistline. But never mind: Even as he approaches eligibility for Social Security, Big G remains ever ready to rumble, and authoritatively defends his title as King of the Monsters in this terrifically exciting flick.

Of course, it helps that he has in his corner Gareth Edwards, a filmmaker who, suitably enough, first attracted attention with a 2010 movie titled Monsters. Edwards’ latest creature feature benefits greatly from the director’s ability to pull off a tricky balancing act: While ingeniously reimagining the legend, he also respectfully acknowledges the tradition. In short, he lets Godzilla be Godzilla.

The mythos began in 1954, when the Toho Company of Japan introduced Big G as Gojira, a rudely reawakened dinosaur who developed toxic halitosis and an extremely bad attitude after exposure to H-bomb testing in the South Pacific. (The plot device of mutation through radiation was profoundly impactful on Japanese moviegoers less than a decade after the nuking of Hiroshima and Nagasaki.) Growling and grouchy, the fire-breathing behemoth sauntered though Tokyo with a sumo-wrestler shamble while burning buildings, gobbling trains, stomping bit players, and generally making an epic nuisance of himself.

Two years later, legendary producer Joseph E. Levine and a group of associates renamed the movie and its eponymous star when they released Godzilla, King of the Monsters, a redubbed and re-edited version of picture designed for English-speaking audiences. Some of the Toho-produced footage was trimmed to allow for new scenes featuring Raymond Burr as a gravely serious journalist – named, no kidding, Steve Martin -- who provided the creature-feature equivalent of play-by-play commentary. (“A prehistoric monster just walked out of Tokyo Bay!” Geez, ya think?)

But none of these alterations dulled the movie's surprising power as a cautionary Cold War fable about the threat of nuclear annihilation. Keep messing with the forces of nature, Godzilla warned, and this could happen to you. 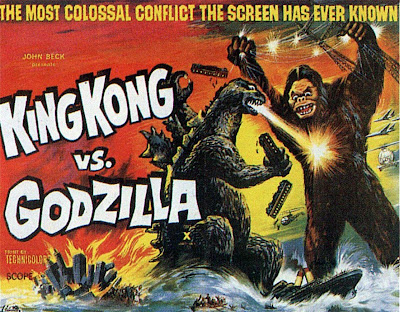 In the three sequels that followed, Godzilla continued to come across as a cranky bully who enjoyed nothing more than incinerating large portions of major urban areas. Whether he was trading punches with an ornery dude in a monkey suit (King Kong Vs. Godzilla) or trying to pluck the wings of an economy-size insect (Godzilla Vs. Mothra, a.k.a. Godzilla Vs. The Thing), Big G made The Incredible Hulk seem like a paragon of polite decorum.

But then, as though sensing audiences might be tiring of his anti-social tendencies, Godzilla transformed himself into a kinder, gentler creature. The rehabilitation process began in Ghidorah, The Three-Headed Monster (renamed Ghidrah, The Three-Headed Monster for U.S. release), a 1964 opus that introduced the infamous triple-headed beast who would go on to become Big G's most frequent foe. In the next 10 Zilla Thrillers, Big G solidified his antiheroic image as an international pop icon by repeatedly saving mankind from alien invaders and their mutant monster henchmen. In Son of Godzilla (1967), he actually became a bachelor father, adopting an orphan hatchling and teaching the Muppet-like critter how to breathe fire and stomp bad guys.

Most Zilla Thrillers of Big G's good-guy era received minimal theatrical exposure in North America. And with good reason: Badly dubbed, simplistically plotted and hopelessly cheesy, they were best suited as fodder for drive-in double bills and Saturday afternoon TV. But despite their exuberant tackiness — or maybe because of it — these are the movies that elevated Godzilla to folk-hero status among camp-savvy baby boomers and thrill-seeking Gen-Xers. Indeed, Godzilla was such a lovable cuss during the 1970s that he popped up as an animated adventurer in a TV cartoon series.

Nearly a decade after Terror of Mechagodzilla (1975), the last "good guy" Z-movie, the bigwigs at Toho decided it was time to let Godzilla again be as nasty as he wanted to be. So they reintroduced him as a fire-breathing fiend in The Return of Godzilla (1984). Once again, a U.S. distributor hired Raymond Burr for an Americanized edition, Godzilla 1985. (Trivia note: A poster for this flick appeared prominently in Roger Ebert’s office during the intro for the syndicated Siskel & Ebert TV show.) Oddly enough, however, this retrofitted version was a box-office disappointment. Maybe U.S. audiences were uncomfortable with the idea of a bad-to-the-bone Big G. Or maybe they simply preferred to see Godzilla shooting hoops with Charles Barkley in TV ads. 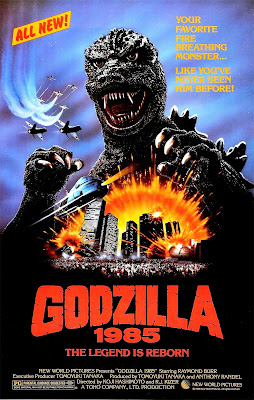 In any event, Toho continued to crank out sequels for domestic Japanese consumption – and sporadic home-video release in the US – until the 2004 production of Godzilla: Final Wars. They actually killed off Big G in 1995’s Godzilla vs. Destoroyah. But, of course, you can't keep a good monster down: By the end of the movie, a leaner and meaner Godzilla Jr. was ready to carry on the grand tradition of crushing innocent bystanders and blowtorching through Tokyo.

In sharp contrast to this born-again behemoth, the computer-generated creature of 1998’s American-made Godzilla was something of a wuss. Part of what has always made his Toho movies so popular is Big G’s badass, take-no-crap attitude. Even during his “good guy” phase, he was at his crowd-pleasing best whenever he was swatting buildings, flaming trains, and laughing out loud at heat-seeking missiles. But when Godzilla did Manhattan in director’s Roland Emmerich’s lavish but sluggish remake, the CGI weenie usually ran away from his attackers, and caused most of his damage by accident.

Rest assured, Gareth Edwards doesn’t make the same mistake in his new and improved Godzilla reboot. True, he mercilessly teases his audience during the first half of the film, giving us only sporadic glimpses at the title creature while employing the same delayed-gratification technique he used in Monsters. But when push comes to shove and the battle lines are drawn in the climactic Kaiju-vs.-Kaiju clash – yes, you guessed it, Godzilla isn’t the only monster in this particular mix --  Edwards’ Big G is bodaciously large and in charge, romping and stomping with a purposeful pugnacity that recalls both the whup-ass heroism of the ‘60s and ‘70s “good guy” Godzilla and the fearsome ferocity of the bad boy that razed Tokyo back in 1954.

Better still, this Godzilla – unlike Emmerich’s pretender – actually breathes fire. And let’s be honest: Isn’t  that what really makes a Godzilla movie a true Godzilla movie? 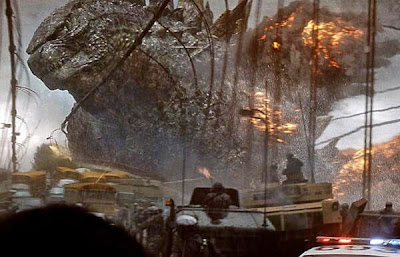 If you want to pass as a diehard G-Fan, always remember: The Original Gangsta Lizard is charcoal gray, not green, in the overwhelming majority of his movies. And no, despite all the stories you’ve heard to the contrary, he doesn’t emerge victorious in the Japanese version of King Kong vs. Godzilla. To further enhance your ability to bluff, study the following factoids.

A.K.A. GODZILLA: The original Godzilla was such a smash in Japan that a sequel – Godzilla Raids Again – was rushed into production, and released domestically in 1955. Four years later, however, this follow-up was re-dubbed and restructured, and released by Warner Bros. as Gigantis, The Fire Monster. No kidding: Warners sold the movie as an original, not a sequel, featuring an entirely different creature with a completely different roar. Mothra got even less respect when Mothra vs. Godzilla (1965) was picked up for US release by American-International Pictures. That film was retitled Godzilla vs. The Thing, and sold with advertising art that depicted Godzilla fighting… a giant question mark. 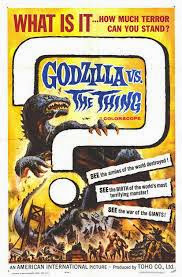 BLESSED ARE THE PEACEMAKERS: Mothra had her hands full... er, her wings full... well, she had a pretty tough time of it while rehabilitating Godzilla in Ghidrah, The Three-Headed Monster (1964). When she initially approached Big G to join her and Rodan in a triple-team assault on Ghidrah (a.k.a. Ghidorah), Big G in effect bellowed: "Help those pesky humans? Fuhgedaboudit!" In the end, though, Godzilla fought the good fight because -- well, hey, a monster's got to do what a monster's got to do.

MADE IN USA: Raymond Burr appeared in scenes added to Godzilla and Godzilla 1985 by US distributors, but only one Western actor ever actually played a lead role in a Toho-produced Zilla Thriller. Monster Zero, a 1965 feature also known as Invasion of Astro-Monster, had ‘50s TV star Nick Adams (The Rebel) improbably cast as Astronaut Glenn -- no, not that Astronaut Glenn -- a blunt-spoken, two-fisted hero of the Tokyo-based World Space Authority. Rodan could flap his wings, and Godzilla might break into a victory dance, but only Adams could sneer at the evil extra-terrestrials and – in the English-language version, at least -- growl: “You rats! You stinkin’ rats!” 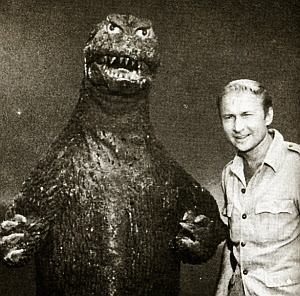 THE ORIGINAL SURVIVOR: During his “good guy” phase – roughly speaking, from Monster Zero to Terror of Mechagodzilla (1975) – Big G sought R&R between battles on Monster Island, a sort of creature-friendly Club Med where he swapped war stories with Mothra, Rodan and other occasional allies. Fortunately for all parties involved, no one ever suggested a tribal council to expel any pariahs.

ZILLA SPEAKS: In 1972’s Godzilla vs. Gigan (a.k.a. Godzilla on Monster Island), Big G inexplicably gained the ability to speak. Mind you, he was limited to conversations with another rubbery beastie, the spiky Anguirus, and he remained a monster of few words. ("Something funny is going on! You better check!") But the effect was jarring enough to unsettle long-time G-Fans. So much so, in fact, that the gimmick was never repeated in subsequent Zilla Thrillers.

PAST IMPERFECT: Toho waited until 1991 before spilling the beans about Godzilla’s war record.  In Godzilla vs. King Ghidorah, a densely plotted time-tripping melodrama, we learn that a pre-irradiated Big G made first contact with humankind as a long-necked dinosaur who, during World War II, helped Japanese soldiers repulse American invaders on a South Pacific island. Which, of course, may help explain why this picture never got a U.S. theatrical release.

I looked at this and thought itwas going to be more than I ever wanted to know about Godzilla. Then I actually started reading it and disovered that I did want to know it all. I couldnt stop reading! THANK YOU!!!