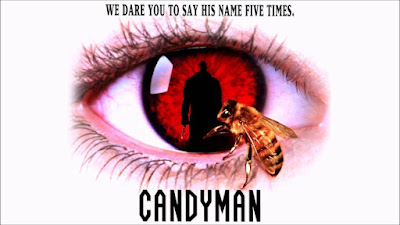 October 16, 1992 | Candyman is unique among mad-slasher monster melodramas, in that it has a brain in its head as well as blood on its hands. There’s enough  full-bore gore to satisfy genre fans, but not so much that it obliterates the movie’s flashes of savage wit and crafty intelligence.

Written and directed by British filmmaker Bernard Rose, who offered subtler, scarier thrills in Paperhouse, Candyman is based on ”The Forbidden,” a short story by horror master Clive Barker. The setting has been changed from Liverpool to Chicago, but the story’s basic premise — the bogeyman is alive and well — has been retained.

Virginia Madsen, an actress heretofore best known for playing femmes fatale and assorted other hot babes, gives her most impressive screen performance to date as Helen Lyle, a doctoral candidate in search of “modern urban folklore.”

The good news is, she finds exactly what she’s looking for in the Cabrini Green public housing projects, where a legendary hook-handed killer is claiming a very real body count. The bad news is, Candyman, as the dread fellow is known, wants to add Helen to his hit list.

One of the more pleasant surprises in Candyman is that, unlike many far more prestigious movies, it is up-front and evenhanded in its approach to inner-city racial tensions. Not all of the low-income black residents of Cabrini Green are gang members or drug dealers. Indeed, most of them are honest, hardworking people trying to get by despite the presence of gangs, dealers and a hook-handed killer in their midst.

Candyman himself, played with lordly malevolence by Tony Todd, is an educated black man who became a monster only after his violent death at the hands of a racist mob.

The movie is a bit fuzzy, to put it politely, when it comes to explaining exactly how this transformation occurred. For that matter, it’s never made very clear just why Candyman appears each time anyone, black or white, says his name aloud five times while looking in a mirror. But, hey, this is a monster movie based on a Clive Barker story, not a docudrama based on Helen Lyle’s thesis.

Candyman becomes increasingly less logical and much bloodier as it races toward its climax. But the scary stuff is very scary, and Philip Glass’ high-toned gloom-and-doom musical score makes it all the more spooky.