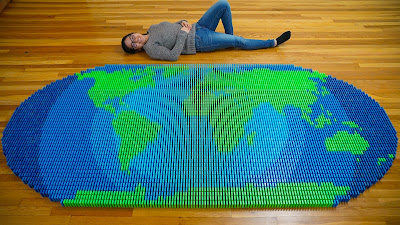 If we could all agree on a working definition of the term “nice” — one that implies bemused appreciation more than condescending disparagement — it could easily apply to Lily Topples the World, Jeremy Workman’s cheery documentary about a celebrity “domino artist” whose infectious enthusiasm and ingratiating can-do spirit are almost enough to make you forget, or willingly ignore, that the film makes little attempt to sustain dramatic tension or even indicate troublesome obstacles while following its subject on her path to success. Almost.

Of course, if Workman’s film truly is an honest portrait and not an authorized biography, it’s difficult to blame him for not manufacturing cruel doubts or crushing defeats like someone trying to hyperbolize an inspirational docudrama. Based on the what we see here, life appears to have been (so far, at least) an unbroken string of triumphs for Lily Hevesh, a 20-year-old Chinese adoptee raised in small-town New Hampshire who has written her own version of the American Success Story by becoming a world-famous domino toppler and, not incidentally, the only significant female in her field.

If Lily were any less unaffectedly charming — if she didn’t comes across as, well, so nice — it wouldn’t  be nearly so pleasant to watch her evolution from obsessed hobbyist to Internet superstar (recording more than more than 1 billion YouTube views for her domino videos) to a role model who routinely attracts hordes of awestruck admirers at public appearances. (Her eagerness to put nervous strangers at ease and encourage their own domino endeavors is, to use another hard-to-define term, quite sweet.) And when Workman offers extravagant examples of her artistry — thousands of intricately designed strings of meticulously positioned, multicolored plastic rectangles that, when push comes to shove, become chain-reaction spectacles of slow-motion, rainbow-hued visual fireworks — it’s well-nigh impossible not to empathize with her obvious sense of accomplishment.

(Of course, if you feel one display of domino toppling is pretty much like another, your mileage may vary.)

Workman generates a surprising amount of suspense as Lily carefully navigates about her creations-in-progress, displaying a dancer’s grace in her stockinged feet while lithely stepping over and around lines of dominos, always just one miscalculated move away from disaster. On the other hand, Lily’s indefatigable determination is such that, when one project does accidentally collapse during set-up, she registers disappointment for maybe five seconds, tops — and then immediately starts to rebuild.

So what makes Lily tick? The film fleetingly hints at childhood feelings of insecurity and abandonment after being placed in an orphanage as an infant — a result of China’s One Child Policy — which Catherine Hevesh, her adoptive mother, movingly describes when she recalls the time when Lily, then barely a toddler, tearfully begged her mom not to let anyone “take me away.” There are references to her “outsider” status while growing up in community with few if any other Asians. And it’s more-than-casually mentioned that, during her early string of YouTube videos, she remained unseen and identified only as Hevesh5, suggesting not only shyness but also a keen awareness that sexism might impede her seemingly irresistible rise.

And yet, these revelations — which really aren’t explored as possible motivations — are practically the only dark clouds to ever appear on the blue skies as Workman’s relentlessly upbeat documentary, filmed over a period of three years,  charts Lily’s tightly focused (but somehow never off-putting) campaign to invent herself as an Internet influencer and savvy businesswoman while pursuing her art.

That art has enabled Lily to hang with the likes of Will Smith (at 17, she created the domino sequences for his film Collateral Beauty) and Jimmy Fallon (for whom she designed an especially ambitious display to mark his reaching his 20-millionth YouTube subscriber), and empowered her to negotiate with toy manufacturers to produce her very own brand-name product — H5 Domino Creations. It should be noted that Lily conducts deal-making meetings while accompanied by Mark Hevesh, her proudly supportive dad. It should also be noted that there’s no doubt at any point about whether father or daughter has the final word on career-building decisions. By the end of Workman’s film, it’s clear Lily has earned it.

Email ThisBlogThis!Share to TwitterShare to FacebookShare to Pinterest
Labels: Lily Topples the World