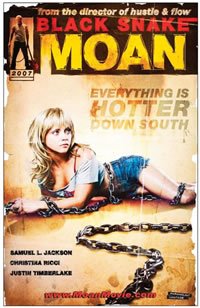 The Hustle & Flow duo of actor Terrence Howard and director Craig Brewer will reunite to film a biopic of Charley Pride, the first (and, some would claim, only) African-American country music superstar. It's obviously a dream project for Brewer, who spoke enthusiastically about its possibilities when I conducted a Q&A with him and producer Stephanie Allain last spring before a capacity crowd at the Nashville Film Festival. And speaking of possibilities: It's positively titillating to consider what might be waiting for us in Brewer's next film, the steamy Black Snake Moan.
Posted by Joe Leydon at 10/03/2006 07:07:00 AM

That poster has a really great old trash-magazine vibe -- it could have come straight off the cover of a 1967 edition of "True Romance" with some lurid headline like "I was a Slave of Love!"
I think the BSDM crowd is a lock (pun definitely intended).

Seriously, I am looking forward to anything and everything Craig Brewer puts his hand to.