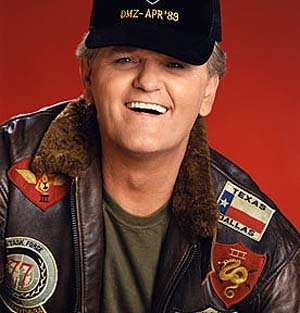 Jerry Reed wrote songs for superstars such as Johnny Cash and Elvis Presley, and scored smash hits on his own with the likes of “Amos Moses” and “When You’re Hot, You’re Hot,” 70’s chart-toppers distinguished by Reed’s rambunctiously raspy vocals and twangy guitar virtuosity. But it’s entirely possible that most people will remember the Atlanta native best as a scene-stealing character actor who specialized in Southern-fried sidekicks (Smokey and the Bandit, Hot Stuff, Bat-21). He was surprisingly effective as a deadly serious redneck crime lord in Burt Reynolds’ Gator, and a sassy/cynical cop in the short-lived 1977 TV series Nashville 99. But wait, there's more: He even managed to occasionally upstage Walter Matthau and Robin Williams as a domesticated hit man in Michael Ritchie’s under-rated The Survivors.

Of course, some moviegoers will never forgive Reed for being so mean and nasty to Adam Sandler in The Waterboy (Reed’s final screen credit). On the other hand, Reed shouldn’t be blamed for Smokey and the Bandit Part 3, arguably the most ill-starred “threequel” in movie history. When Burt Reynolds refused to take a third spin in his Trans Am, someone had the bright idea to cast Jackie Gleason as the blustery Sheriff Buford T. Justice and speedaholic “Bandit” Bo Darville. Unfortunately, preview audiences were hopelessly confused (if not downright enraged) by the double-dipping. Even more unfortunately, the producers didn’t let a sleeping dog lie. Instead, they deep-sixed the scenes with Gleason as Bandit, and hired Reed to revive his Cledus Snow character from the previous two Bandit comedies in last-minute re-shoots. Not surprisingly, ticketbuyers stayed away anyway. But, like I said: It wasn’t Reed’s fault.
Posted by Joe Leydon at 9/02/2008 03:29:00 PM

Wonderful blog. I came in on a Google search for Charlie Joffe.

I watch "The Survivors" at least once a year, and have since it was released on VHS. [note to self: Get the DVD] And, Jerry Reed's performance was outstanding, esp. his attempt to appear as black. Remember, "Mo Fo?" This great character preceded RDJ's in "Thunder" by decades.

The reason I wrote is that I believe his death-year needs a fix.

Keep on keepin' on,
Arnie Tracey

PS I'll be back. Arnold

Thanks for the head's up. That's what I get for rushing through an obit while (a) preparing to leave for Toronto, and (b) trying to keep track of the slow-motion train werck that is Sarah Palin's VP nomination. Jerry -- who was a very gracious gentleman when I interviewed him years ago for The Houston Post -- deserved better. The date has been changed. Again, thanks.